In researching my trip, I was surprised to find this chart about who the big players in African agriculture are.  I thought the Chinese and Indians were the dominant players. 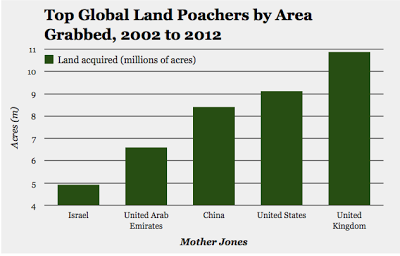 Allowing for the POV of the source article, I will assume the numbers are correct because the original study source is gated and costs.

There are several noteworthy funds investing in Africa, but one name that caught my eye was Bruce Rastetter. 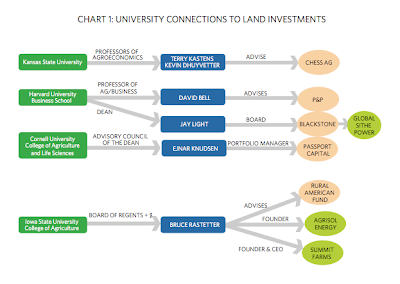 His name pops up occasionally in IA politics, such as here:


In a letter to the university, Harkin wrote that concerns about restrictions on research led him to make the decision, despite the appeal of leaving his papers at ISU where he learned “the force of ideas” and was exposed to diverse opinions.
“But after a time, it became evident that the university would not grant the Institute the very freedoms that I learned to cherish at Iowa State,” wrote Harkin, a Democrat who is not seeking re-election in 2014.
The institute has been a source of political controversy since the Iowa Board of Regents, which governs the state’s universities, voted to create it in April 2011. Republicans have questioned the ethics of naming the institute after a sitting senator. The institute’s advisory board and regents leaders also battled over guidelines for agriculture research.
State Sen. Joe Bolkcom, D-Iowa City, on the Senate floor Wednesday, decried the circumstances that resulted in Harkin’s decision. Specifically citing Regents Craig Lang and Bruce Rastetter for “unnecessary meddling,” Bolkcom said he was disappointed in what had occurred and described it as a threat to academic freedom. [More]

I realize this type of investing attracts the umm, more speculative investors at first, and many of them tend to mingle politics and profits. But I'm getting a nervous feeling too much of what passes for legitimate business practice in the world of global farmland is only our version of LIBOR rules.

Something else that is interesting that your blog didn't report was that the director of the Harkin Institute was completely blindsided. He saw no restrictions to academic freedom. The Faculty Senate at ISU saw no restriction to academic freedom. It appears to me Sen Harkin is getting out of the public university because his wife doesn't have as much pull on the Board of Regents anymore. O ya, and never mind the donations to the institute are coming from organizations that could benefit politically and financially from his work in congress. http://theiowarepublican.com/2013/boo-hoo-the-register-needs-to-stop-crying-about-the-harkin-institute/

Rastetter and Lang hate Harkin. What a surprise. They both want his job.