The curious case of guns and hunters...

President Obama has been a godsend to the gun industry, with sales booming after each conspiracy myth is rolled out. But at the same time, fewer homes have guns.


Second, for all the attention given to America’s culture of guns, ownership of firearms is at or near all-time lows.  Since 1973, the GSS has been asking Americans whether they keep a gun in their home.  In the 1970s, about half of the nation said yes; today only about one-third do.  Driving the decline: a dramatic drop in ownership of pistols and shotguns, the very weapons most likely to be used in violent crimes. [More] 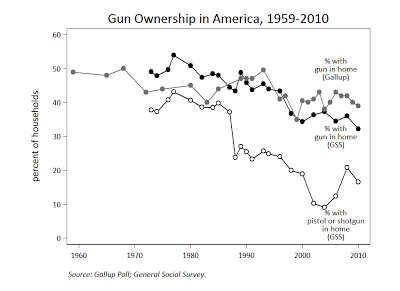 So it would appear we have a smaller number of citizens with a larger number of guns. Not sure what that means.

But at the same time, the popularity of hunting is dropping almost as fast. Take ducks, for example.


The annual duck hunting season in the United States is traditionally big business, but while bird numbers are rising faster than they have for decades, the number of hunters continues to fall. Far from being good news for ducks a new study in the Wildlife Society Bulletin shows how the loss of revenue from ‘duck stamps’ could result in millions of lost dollars for vital conservation work.

“The last 15 years have brought hunting opportunities not seen since the turn of the last century,” said Dr Mark Vrtiska from Nebraska Game and Parks Commission. “The waterfowl population has passed 40 million six times since 1995, something only seen nine times since records began. These should be the glory days for duck hunting.”


The fact is, hunter numbers peaked nationwide in the late 1970s and then started sliding. By the 1990s they were plunging across America as the percentage of hunters in the population declined.
Wisconsin dodged that 1990s plummet, insulated by a large rural population that embraces hunting and has easier access to hunting land. From 1991 through 2000, Wisconsin averaged 675,185 gun-deer licenses annually, up 2.6 percent from 658,257 during 1981-1990.
But as more urbanites built homes and planted lawns where cows, steers, deer and farmers once roamed, our hunting population was destined to drop. From 2001 through 2010, annual gun deer licenses averaged 642,466, down 5 percent from the '90s. [More]

The decline of hunting could be a real game changer as fewer of us are familiar with firearms and probably more likely to be averse to ownership as a result. Nor is it a sport you "take up" like golf, I would think. It seems more like something you grow up with, as a rule.

This is one reason I don't waste much time debating gun issues - it's slowly going the right direction without all that vitriol in my life. I'd like to be able to prevent another Newtown, but that looks like tilting a windmill. Pretty pathetic I know, but anything else just seems to add fuel to a dying fire.

Email ThisBlogThis!Share to TwitterShare to FacebookShare to Pinterest
Labels: culture