Maybe not. Student debt is a monstrous problem but can a liability be a bubble?


An economic bubble (sometimes referred to as a speculative bubble, a market bubble, a price bubble, a financial bubble, a speculative mania or a balloon) is "trade in high volumes at prices that are considerably at variance with intrinsic values".[1][2][3] It could also be described as a trade in products or assets with inflated values.
While some economists deny that bubbles occur,[4][page needed] the cause of bubbles remains a challenge to those who are convinced that asset prices often deviate strongly from intrinsic values.
While many explanations have been suggested, it has been recently shown that bubbles appear even without uncertainty,[5] speculation,[6] or bounded rationality.[7] It has also been suggested that bubbles might ultimately be caused by processes of price coordination[8] or emerging social norms.[7]
Because it is often difficult to observe intrinsic values in real-life markets, bubbles are often conclusively identified only in retrospect, when a sudden drop in prices appears. Such a drop is known as a crash or a bubble burst. Both the boom and the burst phases of the bubble are examples of a positive feedback mechanism, in contrast to the negative feedback mechanism that determines the equilibrium price under normal market circumstances. Prices in an economic bubble can fluctuate erratically, and become impossible to predict from supply and demand alone. [More]

Well, that cleared that up!

I suppose those holding student debt financial instruments such as Sallie Mae bonds, are susceptible to "bubbleconomics".  "Not so" says the boss.


SLM, known as Sallie Mae, boosted its originations of non- government-guaranteed education loans to $1.2 billion in the first quarter, up from $940 million in the year-ago period, according to a statement yesterday. The Newark, Delaware-based company is forecasting $3.2 billion of originations in 2012.
While rejecting claims that a bubble is forming in the student-loan market, Lord said that the $200 billion in new loans taken out during the past two years was surprising.
“I confess to being a bit wide-eyed myself at the $200 billion number,” he said.
Less than $20 billion of that debt was private, or non- government guaranteed, he said. Sallie Mae is increasing private loan originations after legislation passed in 2010 cut companies out of the market for government-backed lending. [More]

Certainly the hysteria is bubble-like. And it seems to me to have some justification. 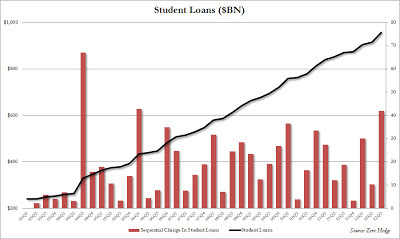 Also, the introduction of asset-backed securities in this market (which worked out so well for mortgages) is an ominous sign.


As Business Insider noted in the summer of 2012, federal student loan debt is only part of the equation. According to a report by the Consumer Financial Protection Bureau dated August 29, 2012, U.S. consumers have in excess of $150 billion in private student loans on their books. The report notes that the market for private student loans grew alongside investors' demand for asset-backed securities and between 2005 and 2007,


...the percentage of [private] loans to undergraduates made without school involvement or certification of need grew from 18% to over 31%...[as lenders] originated loans to borrowers with low credit scores...[making] private student loans riskier for consumers."

The private loans were securitized and those doing the securitizing could realize a 5% profit upon the sale of student loan asset-backed securities (hilariously called 'SLABS') to investors. Of course, the SLABS effectively transferred the risk of default to the investors and as such, it made little difference to the originators of the loans or to those doing the securitizing whether the borrowers ever intended to repay the debt or not. All of this changed when the credit bubble burst of course and as the demand for asset-backed securities declined, so too did the amount of private student loan originations. [More]

Seriously, SLABS? For the most part I feel scant sympathy for investors who would buy a product with this name. Meanwhile, this reinforces my opinions of most in the financial community who will sell you anything if the pass-through fee works for them.

Still, this whole debacle reinforces my belief that we do not truly understand how much idle wealth there is available for chasing even dubious investments. The predicted collapse will affect far fewer of us than the oft-compared mortgage bubble because they cannot evict you from your education. They can cripple your credit rating for life, but at some point, that becomes a problem for the credit rating agencies.

The investment class will feel this far more painfully than the consuming class. As long as we don't bail them out, it works for me.

This will also deliver a clear market signal to higher education, something that is badly needed.