Has a positive effect on unemployment? While I have speculated that a whole bunch of farm wives in their 50's would tell some bosses where to put their job once they had access to the insurance market, this phenomenon might be more widespread than just ag. 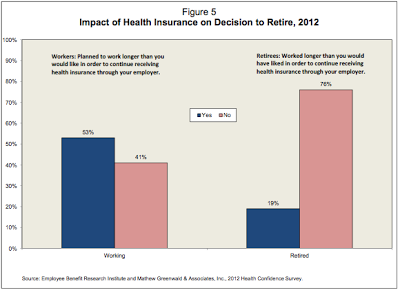 The Employee Benefits Research Institute recently surveyed workers and retirees on how health care benefits factored into the timing of their retirement. The short answer is: A lot.
Three-quarters of retirees said they worked longer than they would have otherwise in order to maintain access to their health plan. A majority of current workers agreed with a statement that said they “planned to work longer than you would like in order to continue receiving health insurance through your employer.” [More from chart source]

Should retirement become an easier option for Boomers, some holes should open up for those currently unemployed or starting out. While I doubt those will be at the same salary, they at least are possible job opportunities.

Of course, access to health insurance is not the same as getting it free. And folks, especially conservatives bitterly opposed to and largely clueless about Obamacare are starting to realize how expensive coverage is, especially top-tier plans.


It turns out that the IRS published some final regs related to Obamacare recently, and in an effort to be helpful they provided some worked-out examples that include some assumptions about how much health coverage is likely to cost for various kinds of families. In one example, they assume that a worker can buy coverage for himself for $5,000 and coverage for his entire family of four for $20,000. They then work out the tax implications of all this.
So is this unusual? Not really. The average cost of healthcare coverage for a family is currently about $16,000, and by 2015 (the base year for the IRS examples) that will probably be around $18,000 or so. And that's for employer-sponsored plans. Individual plans are generally steeper, so $20,000 isn't a bad guess. It might be a little high, but not by much. And the family in question will, of course, be eligible for generous subsidies that bring this cost down substantially, thanks to the Affordable Care Act. They won't actually pay $20,000 per year.
So is this outrageous? An example of Obamacare run amok? Hardly. It's just an example of how damn much healthcare coverage costs in America and why we needed Obamacare in the first place. Apparently a lot of conservatives are shocked when they find this out. [More]

The main reason is pretty simple - we pay a lot more than other OECD countries for all kinds of care, from operations to prescriptions.


Similarly, if you compare U.S. health care spending to health care spending in foreign countries you see that again the main issue is just paying higher prices for the same services. It's not that Americans are unusually sick or that Americans use an unusually large amount of health care, it's that foreign countries engage in more nationwide price-setting to ensure low per unit prices for health care services. Sarah Kliff has a post making the same point in a new super-clever way. She's got this chart from the National Center for Health Care Reform where they looked just at America's unionized auto workers. That's a large and geographically dispersed population and it lets you compare high-cost regions to low-cost regions. And this is what you get: 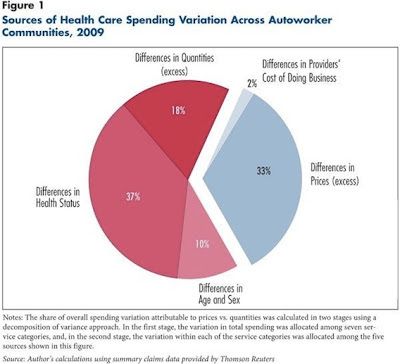 This is the relatively unknown upside to Obamacare: more Americans will get some first-hand knowledge of what their coverage costs, instead of a number on their pay stub.

Once this market knowledge is widely available, not only will the employment-insurance link be broken, but consumer choice will start taking effect. By opting for larger deductibles, for example families could take home more pay and make better choices about health issues.  We already suspect co-pays are changing how often we visit doctors.

And I think the medical industry will suddenly face a need to justify frankly insane prices. Consumers will make better choices about lifestyles as it becomes a financial decision as well as well-being. Everything we can do, such as exercising, eating more kale (blecch), or curbing some bad consumption habits (cough - drinking) will mean real savings to us, not our employer. The pieces will be in place for good market signals and economic nudges.

In other words, the much derided "socialist" nature of Obamacare could be a giant step toward a freer market in healthcare.

How weird is that?

It seems absurd to me to say Obamacare will bring us toward a freer market. If we all recognize a free market with consumers being aware of real costs and allowed to make a decision on their own that would collectively drive the market, than why not recognize that the conservative position of eliminating interstate insurance purchases would have been a great first step to introduce market forces. The other aspect you ignore that has been well-documented in many studies is that the reason US health care is expensive is in large part the built in costs and extra testing associated with our lack of liability reform. That was purposely omitted from Obamacare. Many democrats said they would deal with that separately, but of course they've forgotten all about that given the huge donations they get from trial lawyers.