We began in SA talking with a large farmer (Shoeman Farms) and the head of a gigantic agribusiness, Afgri, as well as our hosts from Kongskilde (with whom I am affiliated).

Observations from my notes, in no particular order: 
We thought the result was pretty revealing. It shows how mining and manufacturing have declined in their contribution to the economy, as has agriculture. And while we like to think that government profligacy has increased, in fact over the past 20 years government spending has declined. The growth areas are also instructive: financial services, communication and trade, and personal services. We are morphing into a services economy. Unfortunately that means the demand for skilled labour has only increased. Those segments of the economy in decline are exactly the ones most able to absorb unskilled labour. It makes even more of a tragedy of our education malaise. [More] 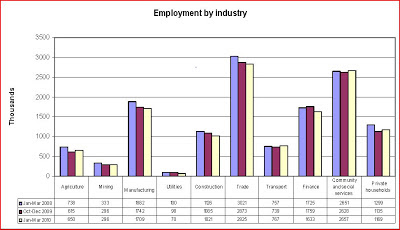 From 1918 to 1926, more than 565 000 citrus trees were planted on 2 260 ha of this estate’s land. For the twenty five years before the estate was sold to the South African government in 1974, it showed a profit of millions of rands every year. After the sale, Zebediela grew to become “the diamond of agricultural projects”. It was of such great national pride that the Reader’s Digest Illustrated Guide to Southern Africa wrote in 1978 that “nearly 400 million oranges are harvested each year from the groves of Zebediela, the world’s biggest citrus estate. The output is sufficient to provide one orange for every eight people on earth.
“At the height of the season, about 15 000 cases of oranges leave Zebediela every day. The fruit comes from more than 565 000 trees irrigated by enough water to supply a city. The whole estate is highly mechanized and many of the most advanced handling techniques in world citrus production have originated from Zebediela. “The first fruit was picked in 1926 after W.H. Gilfillan and Isidore Schlesinger divided the two original farms into 1 200 plots of 2 hectares. A handsome brochure was produced at the time offering the plots at 67 pounds each, to be farmed as a profit-sharing operation.
“The scheme proved particularly attractive to retired army officers and by 1921 most plots had been sold. In 1928, a branch railway to Naboomspruit was opened to carry the ever-growing harvest on the first stage of its journey to all parts of the world. In 1974, the South African government bought the Zebediela Estate.” After the ANC government came to power in 1994, the administration of Zebediela came under the control of the newly-formed Agricultural and Rural Development Corporation (ARDC), a government parastatal whose administration eventually ruined not only Zebediela but scores of other agricultural projects in the area. Before this takeover, Zebediela’s harvest was worth R30 million a year.
It didn’t take long for the corruption, theft and maladministration to set in. By 2001, the estate was in ruins. The original 2 260 hectares planted had been reduced to 800 hectares. Because no fertilizers and pesticides were used, more than half the trees died as a result of the Department of Agriculture’s failure to grant funds for the survival of the project. Only ten per cent of yields could be marketed.
A loss of R35 million in 2001 followed a loss of R30 million in 2000. According to press reports, the estate was “beyond recovery”.(1) Hundreds of thousands of cartons of oranges and lemons were not harvested, and workers were not paid. A lemon yield worth R8 million was left to rot because there was no money to pay staff. The fruit was in any event of inferior quality because it had not been properly looked after. Many of the fleet of 50 tractors collapsed into disrepair. Hundreds of employees were then retrenched.
Managers with in some cases forty years experience were replaced with people who had no experience of farming. One new “manager” was previously a sewing instructor while another was until the previous year a student. The press was informed that not one of the new directors appointed to the Zebediela and its sister Lisbon estate could read a financial statement.(2)
The death throes of the estate peaked at the end of March 2001 when ABSA bank stopped all credit and bounced a pension cheque of R56 million. Other estates in the area met with the same fate. [More from what strikes me as a very biased source, but the best summary I could find]

What it’s about: Most obvious are new interventions in the mineral and exploration sectors (including new taxes, price setting, beneficiation requirements, export restrictions, uncertainty about licence conditions and significantly increased ministerial discretion via the Mineral and Petroleum Resources Amendment Bill), but there are comparable interventions across the economy, as indicated in the ANC’s Mangaung Resolution and in a range of proposed regulatory and legislative changes, including those relating to telecommunications, liquid fuels,  the labour market, employment equity and Black Economic Empowerment (to name just a few).
My view: Since 1994, it has generally been the case that markets consistently overestimate the risk that the ANC and its government will take significantly populist policy measures. The best example of this was in July 2002, when exaggerated targets for black equity participation in the mining sector where leaked and R52b left the JSE resources sector in 72 hours – a buying opportunity of note. However, the traction Julius Malema was able to achieve with disaffected youth post-2009 and the implicit defection from the ANC and its allies in the platinum strikes last year have catapulted the ANC into something of a policy scrabble. While nationalisation is off the agenda, it has been replaced by a policy push that hopes to deploy private companies, through regulation and other forms of pressure, to achieve government (and party) targets of employment, revenue generation, service delivery to local communities and infrastructure build. Increases in the tax take look likely – it’s purely a question of ‘how much the market can bear’.
Government intervention, per se, is less the issue here but rather the confused, generalised and uncertain nature and intent of the interventions. If the interventions do not have the desired results (growth, employment and equality), the risk is that government does not reassess the wisdom of the intervention, but instead uses a heavier hand.
Financial markets: Policy uncertainty puts downward pressure on investment, employment and output in all sectors. In South Africa, these negative impacts will be felt most keenly by companies most exposed to government licencing and regulatory power, or most exposed to government’s political prioritisation. Resources, telecommunications and agriculture all fall into one, or both, of these categories. [More] 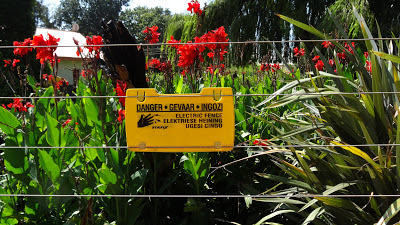 John what do you mean affilated--"as well as our hosts from Kongskilde (with whom I am affiliated)"? Do you only manage that farm in Iowa?

I am on the board of directors of Kongskilde NA (North America). Have been for several years since they were bought by DLG and my Danish friend asked me to help.

I don't manage any farms, let alone one in (shudder) Iowa.