We stopped again in Johannesburg on our way home, and during a 26 hr. layover, took a 4 hr. tour of Joburg and Soweto. The guide, Johan van Biljon was fantastic and the information he shared useful and pretty fairly delivered, IMHO.

So further stuff about SA and the Johannesburg area (my usual random organization scheme):


The mine is one of the three Western Deep Levels mines of the West Wits gold field west of Johannesburg. The mine is near the town of Carletonville. TauTona neighbours the Mponeng and Savuka mines, and TauTona and Savuka share processing facilities. All three are owned by AngloGold Ashanti. The mine was originally built by the Anglo American Corporation with its 2 km (1.2 mi) deep main shaft being sunk in 1957. The name TauTona means "great lion" in the Setswana language. The mine began operation in 1962. It is one of the most efficient mines in South Africa and remains in continuous operation even during periods when the price of gold is low. Since its construction two secondary shafts have been added bringing the mine to its current depth. The mine today has some 800 km (500 mi) of tunnels and employs some 5,600 miners. The mine is a dangerous place to work and an average of five miners die in accidents each year. The mine is so deep that temperatures in the mine can rise to life threatening levels. Air conditioning equipment is used to cool the mine from 55 °C (131 °F) down to a more tolerable 28 °C (82 °F). The rock face temperature currently reaches 60 °C (140 °F). [More]


You can imagine the A/C units needed for that problem. Now add in the consequences of the "open borders"policy instituted by the ANC in the last few years has added to the demand for electricity as immigrants of all categories have flooded south for jobs.

SA was not ready to grow electricity production to meet these demand growth drivers. The result is chronic blackouts/brownouts/conservation measures.

New plants are coming on line in the next few years. They will be coal-fired by default as SA has lots of coal and little else for electricity. Unfortunately much of it is located in shallow veins under pretty good farmland. Hence you see scenes like this: 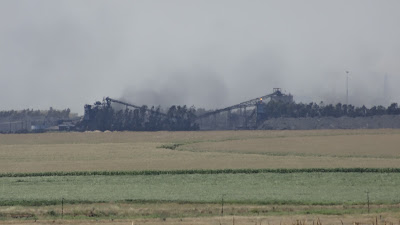 As with urban sprawl, "coal sprawl" distorts land prices, but offers a possible escape route for farmers looking for a new start. Law requires the mine to buy whole farms - not just areas with coal veins. And they bid it up. (See this week's show) 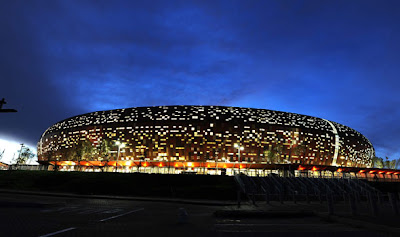 One interesting anecdote was how Joburg coped with the power problem during the 2010 World Cup - a really big deal on the par with getting the Olympics. To keep the stadium lights on (above), trains running and hotels lit, residents were exhorted to turn off all but one light and their TV (to watch the match, of course).

Suffice it to say, backup power systems are a big industry, similar to security.


But while Cape Town's center accounts for half its footprint, it is home to only a fraction of its population. About 2 million of Cape Town's 3.5 million people live to the east in tin and wood shacks and social housing built on the collection of estuary dunes and baking sand flats called the Cape Flats. Most of those Capetonians are black. Class in Cape Town is demarcated by altitude: the farther you are from the mountain, the lower, poorer and blacker you are. Cape Town's beautiful, affluent center is merely the salubrious end of the wide spectrum that describes South Africa's culture and its defining national trait: aside from the Seychelles, the Comoros Islands and Namibia, South Africa is the most inequitable country on earth.
This stark gradation helps explain South Africa's raging violent crime (and why, contrary to legend, Cape Town actually has a higher murder rate than Johannesburg). In 2011 the U.N. Office for Drugs and Crime found that South Africa had the 10th highest murder rate in the world. Rape is endemic. Two separate surveys of the rural Eastern Cape found that 27.6% of men admitted to being rapists and 46.3% of victims were under 16, 22.9% under 11 and 9.4% under 6--figures that accorded with the high proportion of attacks that occurred within families.
But what really distinguishes South Africa from its peers in this league of violence is not how the violence rises with inequality nor its sexual nature--both typical of places with high crime--but its pervasiveness and persistence. With the exception of Venezuela, all the other top 10 violent countries are small African, Central American or Caribbean states whose populations tend to be bound together in close physical proximity, creating tight knots of violence. South Africa, on the other hand, knows crime as a vast stretch of lawlessness covering an area twice the size of France or Texas. And it has been that way almost as long as anyone can remember. [More]

While I don't want to be overly negative, the residents have obviously become somewhat hardened to a situation that stuns outsiders. The most hopeful observation was if the black middle class could continue to grow, and the crime problem becomes more of an economic assault rather than racial, efforts to bring it more under control might bear fruit. Key to this will be the rise of a viable second party and decreasing corruption in government.

Like many African cities, Johannesburg has a chaotic informal public transport system in the form of minibus "taxis". These are not taxis in the typical Western sense of the term – they won't give you a lift to your doorstep. Rather, they are small-scale bus services, often unmarked, operating with neither timetables nor formal stops.
Taxis are the cheapest form of transport in Johannesburg, and are the daily transport lifeline of the bulk of the working population.
More adventurous travellers will find them an interesting African experience – the closest you may get to mixing with ordinary people. They are also the only form of public transport that penetrates every last sector of the city, including the poorest shack settlements.
But there are three reasons why a tourist should exercise caution. Firstly, use of the taxi system for anything other than a short drive requires an expert knowledge of the unwritten lore of hand signs indicating which taxi is travelling where, and an understanding of the various routes and how they intersect.
Second, despite frequent clampdowns by the traffic authorities, minibus taxis tend to be old and in poor condition. Third, minibus taxi drivers, rushing their fares to their destinations as quickly as possible in order to maximise returns, are the city's most notorious drivers, ducking wildly from lane to lane and stopping without warning whenever a passenger wishes to climb on or off.
However, during the Fifa Confederations Cup in 2009 and the 2010 Fifa World Cup, an approved fleet of minibus taxis has been put together to ferry football fans to venues free of charge.

There are conventional metered taxis, but unlike in many other countries these do not cruise the streets in search of passengers, and must generally be summonsed by telephone. Major hotels do often reserve bays for taxi companies, however, and in those that don't, reception staff can quickly make arrangements for visitors. [More]

You have to see it in operation to appreciate the complexity.

Visitors to the coasts (i.e. Capetown, Durbin, etc.) are treated to remarkable scenery and weather. In this aspect SA reminds me of California with a huge diversity in climate and topography.

It's hard not to like both the people and place, and fervently wish them well. They will be tested severely in the next few years. [Good summary here]