The news hasn't been especially good for Walmart recently. First there is that messy business of the bribe problems.


The world’s biggest retailer, Wal-Mart Stores Inc., says it is likely that it will incur a loss from bribery probes into its operations in Mexico and other countries.
The company has been dealing with allegations that surfaced last April that it failed to notify law enforcement that company officials authorized millions of dollars in payments in Mexico to speed up getting building permits and gain other favors. The Foreign Corrupt Practices Act forbids American companies from bribing foreign officials. [More]

But a larger issue (and Jan brought this up recently) is they seem to be doing a lousy job at, you know, selling stuff in stores.


During recent visits, the retired accountant from Newark, Delaware, says she failed to find more than a dozen basic items, including certain types of face cream, cold medicine, bandages, mouthwash, hangers, lamps and fabrics.
The cosmetics section “looked like someone raided it,” said Hancock, 63.
Wal-Mart’s loss was a gain for Kohl’s Corp. (KSS), Safeway Inc. (SWY), Target Corp. (TGT) and Walgreen Co. (WAG) -- the chains Hancock hit for the items she couldn’t find at Wal-Mart.
“If it’s not on the shelf, I can’t buy it,” she said. “You hate to see a company self-destruct, but there are other places to go.”
It’s not as though the merchandise isn’t there. It’s piling up in aisles and in the back of stores because Wal-Mart doesn’t have enough bodies to restock the shelves, according to interviews with store workers. In the past five years, the world’s largest retailer added 455 U.S. Wal-Mart stores, a 13 percent increase, according to filings and the company’s website. In the same period, its total U.S. workforce, which includes Sam’s Club employees, dropped by about 20,000, or 1.4 percent. Wal-Mart employs about 1.4 million U.S. workers. [More]

I think this could be a tiny first hint of wage inflation, which has been absent for a looong time. It will struggle against our seemingly intractable unemployment problem, for sure. And unemployment benefits are clearly ramping down, adding urgency to more job-seekers. 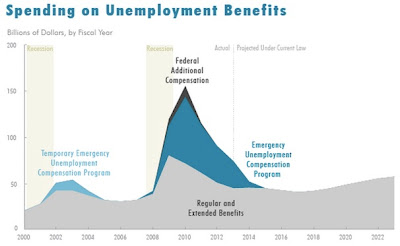 But it may be those forces will not be enough to attract workers to Walmart anymore. Maybe it will take better management and wages.Who'd have guessed?

Some of the stiffest competition, especially in rural areas, comes from "dollar-stores". While this may not pose a big volume challenge, it does dent the invincibility image of the behemoth retailer.

But there could also be a general weariness of "Walmartness" as well as a growing realization that the same prices with better service can be available elsewhere. I know Jan has shifted an amazing amount of "grocery" purchases on-line, and she's not alone. My son has diapers delivered cheaper than he can buy in stores.

The big shift in retailing may occur in this way - product by product. And nothing is harder to overcome than a customer sense of vague dissatisfaction borne from restless boredom.

Email ThisBlogThis!Share to TwitterShare to FacebookShare to Pinterest
Labels: retail