I spoke to the Iowa Ag Leaders Conference yesterday.  It was a new presentation about what ag leaders will be facing and I enjoyed scraping together all the research for it. One of my points dealt with our enormous "succession" industry, and why the otherwise normal and certainly expected process of growing older and ending careers seems to be so hard to accomplish efficiently.

Today I ran across this graph, which adds some substance to this problem. 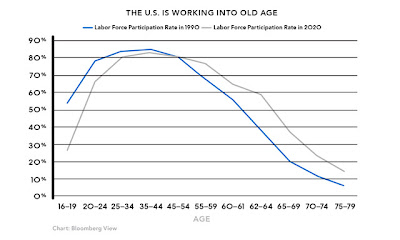 In 1990, 11.8 percent of those 65 and older worked. In 2010 the figure was 17.4 percent. By 2020, the Bureau of Labor Statistics expects it to be 22.6 percent. The numbers are even more surprising for Americans older than 75. Less than 5 percent of them worked in 1990. In 2010, it was 7.4 percent. By 2020, according to the BLS, 10 percent of them will still be toiling away.
Since 1990, the aging of the population would have increased the number of workers older than 55 by 9.6 million if their participation rate hadn't changed. The increase in the participation rate added another 8.7 million. The rise in participation is almost as powerful as the underlying demographic change.
This is a fundamental change in the way America works. Labor-force participation rates have been declining for Americans younger than 45 -- and especially for those younger than 25. The combined effect of these changes is to shift the average American worker's "economic lifecycle." Between 1990 and 2020, the average period spent in the workforce will have shifted roughly five years later. That's a change of historical magnitude, one to be compared to the end of child labor at the turn of the century or the expansion of public high schools after World War II.
The trend toward ever-later retirement looks likely to continue. The Gallup Organization, a polling firm, asks working Americans when they expect to retire. In 1996, the average answer was 60; in 2012, it was 67.
Why is it happening? For two reasons. First, some Americans work longer because they want to. This applies especially to those who've made higher-than-average earnings during their working lives or have white-collar jobs. Their health allows it -- their life expectancy has increased significantly.
But some are retiring later because they have no choice. The wage stagnation of the past decade and loss of savings (including housing equity) during the recession are forcing them to delay retirement. This group hasn't seen the same improvement in life expectancy: Workers with less-than-median earnings have missed out on that trend since the 1970s. They're working longer, though they aren't living much longer, because they have to.  [A little more from an egregiously complete excerpting - sorry]

Farmers are affected by both reasons, although one in reverse. They are living longer, but making more in the final years (as a rule). It's really hard to quit when you are peaking, I think.

Applied to our own situation, I can feel both influences. My health is relatively good, and both the farm and my writing/speaking career have never been as lucrative. But the real hurdle has been chewing my way through the postponed taxes from decades of cash accounting.

I look at my tax bill for 2012 - it's more than my total income from almost all my years previously. And my projections string out for a few more years as I sell out the rolling capital.  So I keep extending my off-farm career to pay that bill...which adds to the income to be taxed next year...and so on.

The goal has been to get the machinery in Aaron's hands without an enormous debt load. Who'd have thunk even very conservative used machinery values would have stayed so high for so long?  Plus the old immediate depreciation lure still works on me.

Whining about this is ludicrous self-absorption, I know. But sometimes we cannot keep ourselves from embracing contradictory and counterproductive tactics and demanding that they work.
Posted by John Phipps at 6:56 AM

Four to five dollar corn may assist you with your tax problem.You work hard all your life and then the bureaucrats want to pay to retire!

Isn't farming physically easier than it used to be, given modern equipment, power steering, etc. etc.?