To show how astoundingly high our medical prices are compared to other first-world countries, WaPo put together a string of graphs. (Hint: The US average is the middle number) 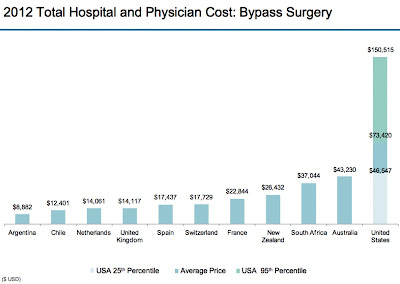 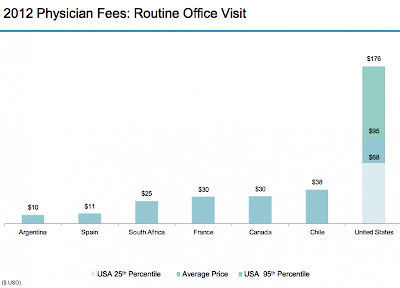 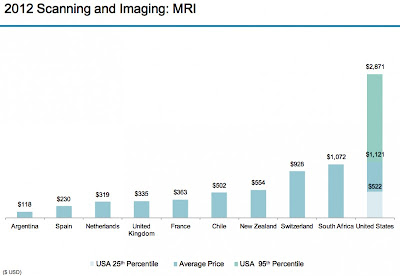 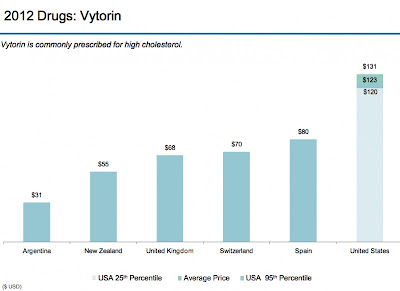 The US is shown as a range because unlike other countries, the prices paid here can vary wildly.

It's hard not to notice which two countries bookend the field. And to spot a singular problem with our system. While you can argue our health care is more advanced, why does that make the same prescription price so much higher here? The pills are identical.

There are two strategies emerging for dealing with this problem, and they don't overlap much. First, is the idea more free market action at the consumer level will empower them to bargain with medical providers. The second is using a matching large force - Medicare to face up to providers.


There is a sense in which the fundamental health-cost theories of Republicans and Democrats have become perfectly contradictory. Republicans believe Medicare is the singular problem contributing to the relentless growth in health-care costs, and the only way to truly fix our health-care system is to turn Medicare into a voucher system, breaking it up among private and public options and letting competition work its will.
Democrats look at the lower prices paid in single-payer countries as well as the lower prices paid by Medicare in this country and come away with a very different conclusion: We could be paying much less and getting much more, but the insurance industry, at the moment, doesn’t have enough power via-a-vis hospitals and other providers.
Medicare, as the nation’s largest payer, is thus the most promising solution to health-care costs, and Medicare should be using its bargaining power to lead the private market — in particular, by persuading hospitals and other providers to make overdue, but difficult, reforms to how they deliver care.
One ongoing example is electronic health records, which were long resisted by providers, but are coming into wide use now not just because the federal government helped providers pay for them, but because Medicare is going to start docking the pay of providers who don’t use them.
Therefore, for Democrats, breaking Medicare up into a mass of competing insurers removes one of the most powerful levers available for controlling health costs. “Medicare has enormous financial leverage to drive changes in medical practice,” Sebelius said. It’s not just that they think premium support won’t work. It’s that they think it would be actively harmful to the cause of cost control, and to do it right now, when medical costs are falling and the Affordable Care Act and all its Medicare-connected cost controls is just going into full effect, would be perverse. [More]

There is some evidence Medicare-like programs can reduce costs by lowering payments. One reason other countries have lower costs are the single payer power of their health systems.

Personally, I don't see much evidence individuals will bargain effectively with hospitals, etc. given the responsibility to do so. When I have done that and talked about it, people around me were horrified at my impudence. "How can you put a price on health?" they gasp. Well, we do it all the time, only we're not the ones with much say in the number.  Perhaps if it really comes out of our pockets we might shop around, but generally we're not in much condition, mentally or physically, to engage in commercial tactics.

Health care is not your usual consumer good, and I'm not sure applying the usual retail economics will take us to a place we want to be.

Email ThisBlogThis!Share to TwitterShare to FacebookShare to Pinterest
Labels: health

I agree with most of your last paragraph--individuals will bargin well with health care providers--if at all. On the other hand look at the receipt you get back from your health insurance, it DOESN'T say "this is what we paid and you owe no more". It say "this is what we paid and this is what you owe the provider". When they start saying the former we'll see health costs come down.
One weekend my wife had to go to one of these Urgent Care places that have sprung up and the bill was horrible. The insurance company paid what their standard rate was and that place came back twice asking for more $. As you can guess we will not be going back!
The only other solution is to, on a national basis, establish price tables and ridgely enforce them. YES price fixing! Not something thought highly of in a capitalist country BUT greed has been in control for so long that it will take something like one of these to break this over pricing.
One of these two solution has to go in place soon if we want quality care to continue.

I have the chance to observe the health care of the Amish in Lancaster County Pa. When surgery is needed they prenegotiate, if possible, with the hospital as to cost and 'prepay' the cost at time of admission. If surgery is an emeergency, they pay the bill cash before discharge. The cost reduction is VERY LARGE. Who says you can not negotiate with big hospitals. I observe 8 grade educated people successfully do it all the time. To borrow a recently reported phrase, 'it is not brain surgery'

I think there is a "not" missing from your first statement in order for it to scan for me.

It is my hope as people see what their coverage costs instead of having buried as a paycheck deduction they will opt for less first-dollar coverage. The throw in some cut-rate retail PA-type clinics for routine stuff and we could begin to make economics work a little better.

It's the high-cost stuff that will be the challenge, IMHO.

Fair point, but I suspect the obvious identity and esteem of the Amish aids their bargaining power. I doubt if others would even be allowed to pay with currency (if that's what you mean by cash).

Also since the Amish are outside Medicare (I think), the hospitals have fewer alternatives.

Yes the statement should read "Individuals will NOT (or cannot) bargin well with health care providers".