A big selling point for ethanol mandates and subsidies has been the chimera of energy independence (or at least, less dependence) from Mideastern oil. As ethanol's environmental claims are at the least diminished, and the actual energy gain is widely accepted as moderate, the flag-wrapping patriotism of this thought has proven to be the go-to point for ethanol backers.

It's not exactly working out as we thought, however. It turns out we a pretending to solve one "addiction" by worsening another.

There is no sign our dependence on oil sources we don't particularly like is dropping. In fact, as Mexican production slips, Canadian production splits off to China, and Venezuela descends into a socialist fiasco, it is very likely we will receive a larger proportion of our oil from places like Saudi Arabia (who by the way supplied most of the 9/11 pilots - not Iraq).

But let's let all that go. Who cares, any way? The more curious problem is our fertilizer dependency. Producing all that corn for "homegrown" energy requires a considerable amount of outside help, it turns out. And it's coming exactly at the wrong time for many reasons.

Thanks to a helpful presentation by Christine Gillespie at my local Crop Production Services "we-tried-to-warn-you" fertilizer meeting, I sobered up to the seemingly grim outlook for that input cost.

To begin with we import practically all our potash and now most (2006) of our N.

U.S. nitrogen and potash supplies largely depend on imports. About 62 percent of nitrogen and 88 percent of potash consumed in the U.S. in 2006 was from imports. Because of limited domestic production capacity, increased fertilizer demand will have to be met largely by imports. [More]

Of course, we're paying for these imports with a currency that currently is about as popular as a banana-republic peso outside our border. This is no small factor.

In fact, Christine calmly explained that with normal growth rates in consumption and factoring expected increases in production from new plants, here is how supply and demand will match up for the next few year for potash. [Note: This is just NEW supplies and demand - not total] 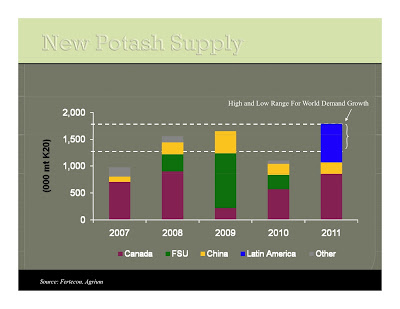 So while the Canucks are chipping in with new production, the Canadian dollar now is real money and while transportation will be less, it won't be cheap K, by any means. Otherwise new potash will come from the former Soviet Union (FSU), China, and a new plant in South America (blue portion in 2011). A cool video about this operation.

Until then, don't look for much in the way of price relief.

But since we are the world's largest exporter of phosphates that's gotta be another story right? Plus production expansion is going on in several places. Sorry again. First, remember our puny dollar. Foreign demand will force our prices up as competitive consumers in India and China can purchase more for less every day. And they want more and more. 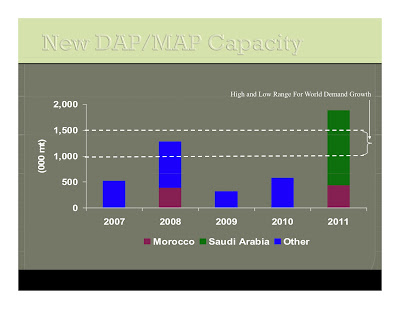 [Again, this is just NEW supply and demand, not total]. Here is where it gets interesting. To meet the stunning shortfall, a monster plant is being built in Saudi Arabia against economic logic for the most part, but they seem to have plenty to invest.

The cost of the entire project has been calculated at around US$2,500 million with the mine costing US$400 million and the railway link US$1,200 million. Sufficient funds exist within the Kingdom to implement this project, with the feasibility plans indicating a four year investment and construction programme to bring the project into operation and establish Ma’aden as a major player in the world phosphate industry. It would appear that supplies of fertiliser have been secured for years to come. [More]

This week wholesale prices for DAP topped $1070/tonne (spelled funny because it's metric and equals 1000 kg. or 2200 proper pounds).

Roll that number around on your spreadsheet for while!

But - and an important but - priced in bushels of corn, fertilizer may not be a reason to hurl yourself under a field cultivator. I went back to 2005 and compared.

[Of course, your results may vary, but it's worth the calculation.] At any rate, not the answer I expected.

Even if I factor in huge price increases, along with yield growth I can handle a 10 bushel or so ratio increase without much economic damage. And I'm pretty sure Christine and her counterparts know this too.

So my point in this long report is the trade-off between oil dependency and fertilizer dependency is significant and xenophobes everywhere need to step back and grasp reality with both hands. The US cannot do without foreign inputs like oil or potash, period.

Once this fact sinks in, all the tough foreign policy talk might strike you as crowd-pleasing political nonsense at best. At worst, it is a recipe for economic disaster. For ethanol backers looking for a reason to justify our their peculiar tax/legal status, the only valid answer is such economic crutches exist because we can make Washington give them.

I think one factor not fully included in this analysis is well, you and me. My guess is you guys are doing exactly what I'm doing: GPS sampling every acre and using every trick to squeeze rates down. In fact, there is a long-standing tendency for suppliers underestimate the power of irritated byers to get along with less. I'm betting we will be at the lower end of the consumption growth estimates here in the US, and while we are only #3 globally in fertilizer use, it will pressure domestic suppliers.

Nor will our colleagues around the world depart from classic price-demand behavior. The assumption of historic correlations between population and fertilizer demand may also not fully include biotech benefits that tweak output upward. For that matter, I can draw on some reserves in my soil in a pinch. I'm not sure we really know how skimpily we can apply fertilizer and still harvest bumper crops, but I think we're about to learn more. We didn't just fall off the turnip truck, and demand curves are not carved in stone.

Then too, we could hit an ethanol "wall".

..ya know Mr. John. With all the talk on the AgWeb Forums about grain and livestock futures, our dependency on foreign minerals, oil and the like, couple that with the foreign investors buying everything in and of America and throw in a bit of European union trying to put us in our place and add some George Orwell, not to mention the real estate market and a good dose of NAFTA, CAFTA and any other AFTA you want...
This has the makings of a really good hostile takeover...or at least a good mystery novel.
I went on the CBOT website and did some "larnin'" about the futures and trading in their Education tab, I learned a lot!!I understand the markets a bit better now. I'm not ready to teach anyone about it but I understand more about how it works. Thanks for pointing me,(discreetly), there.

Why not just get one of those new crop burners that burns so hot, all it leaves is ash and very little smoke, then till it in?

ORRRRR, just disc it over and till it in after it winters.

here's an article that talks about what Mr Anon suggest:

has a possibility..and some perty good facts stated.