Some technologies win, some lose...

The winnowing process for transportation technologies has been underway for some time, and my guess the winner is starting to look like plug-ins and hybrids.

The Wall Street Journal reported this week that executives from General Motors Corp. and Toyota Motor Corp., at the Geneva Auto Show Tuesday, "expressed doubts about the viability of hydrogen fuel cells for mass-market production in the near term and suggested their companies are now betting that electric cars will prove to be a better way to reduce fuel consumption and cut tailpipe emissions on a large scale." Both GM Vice Chairman Bob Lutz and Toyota President Katsuaki Watanabe expressed strong opinions that fuel cells are too expensive and will be for some time and that advances in lithium-ion batteries make them much more practical as a mass-market product. . . . read the WSJ article [More of a great post summarizing the state of play]

Corn growers have been funding fuel cell work for some time, but it looks like the improvement in lithium ion batteries is making plug-ins like the GM Volt look better and better.

To add to this is a recent study that if we all recharged our plug-ins after 10 pm., we wouldn't need any additional generation capacity.

In an analysis of the potential impacts of plug-in hybrid electric vehicles projected for 2020 and 2030 in 13 regions of the United States, ORNL researchers explored their potential effect on electricity demand, supply, infrastructure, prices and associated emission levels. Electricity requirements for hybrids used a projection of 25 percent market penetration of hybrid vehicles by 2020 including a mixture of sedans and sport utility vehicles. Several scenarios were run for each region for the years 2020 and 2030 and the times of 5 p.m. or 10:00 p.m., in addition to other variables. The report found that the need for added generation would be most critical by 2030, when hybrids have been on the market for some time and become a larger percentage of the automobiles Americans drive.

In the worst-case scenario—if all hybrid owners charged their vehicles at 5 p.m., at six kilowatts of power—up to 160 large power plants would be needed nationwide to supply the extra electricity, and the demand would reduce the reserve power margins for a particular region's system.

The best-case scenario occurs when vehicles are plugged in after 10 p.m., when the electric load on the system is at a minimum and the wholesale price for energy is least expensive. Depending on the power demand per household, charging vehicles after 10 p.m. would require, at lower demand levels, no additional power generation or, in higher-demand projections, just eight additional power plants nationwide. [More]

Of course, this view of tomorrow is strongly predicated on the assumption that oil will not be getting appreciably cheaper anytime soon. While this is perversely good news for corn farmers, sustaining the ethanol industry alone will not keep our farms prosperous.

Some recent peak-oil comments were forwarded to me by a loyal reader, and they contained these slides I found insightful. It's important to remember high oil prices are also good if you have any oil at all: 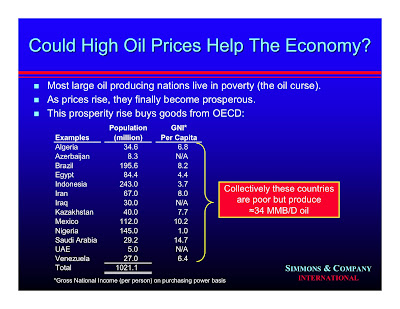 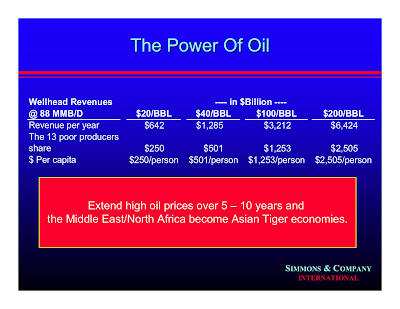 [The whole presentation here. Not an unbiased source, but certainly knowledgeable]

The on-going wrangle over peak oil sidetracks our thinking perhaps away from better preparation for an expensive oil (energy) lifestyle. I think we're getting a taste of the future in our fertilizer prices and farmers themselves will be paying more for food due to energy costs.

I also think we will be encouraged by hard economic choices to lower our production energy consumption. The highest energy use is crop-drying which I hope never to face again. Next would be tillage and harvesting and hauling. All of these are ripe for tweaking. (According to a farmer/trucker running 26 trucks hauling LP and NH3, the 2007+ engines are not good news mileage-wise, albeit better for emissions)

Farmers seem to have the ability to imagine high crop prices for some time. I wonder if like me, many are considering controlling the high fuel prices that come along with it. My take is we are rapidly pushing rents and inputs to reduce our margins to numbers similar to 2005 or so.

The difference is a fuel cost of say $30/A is a bigger target for fuel use reduction technology (smaller pickup) and methodology (strip-till). And it could be the next big management payoff will be in slowing the rise of costs to squeeze profits.