Toward a more uniform diversity...

The immigration debate fascinates me on several levels. First, there is the considerable ignorance about the cost/benefit ratio of immigrants. The wage competition pressure turned out to be much less than expected, for example.

Even economists striving hardest to find evidence of immigration's effect on domestic workers are finding that, at most, the surge of illegal immigrants probably had only a small impact on wages of the least-educated Americans — an effect that was likely swamped by all the other things that hit the economy, from the revolution in technology to the erosion of the minimum wage's buying power.

When Mr. Borjas and Mr. Katz assumed that businesses reacted to the extra workers with a corresponding increase in investment — as has happened in Nebraska — their estimate of the decline in wages of high school dropouts attributed to illegal immigrants was shaved to 4.8 percent. And they have since downgraded that number, acknowledging that the original analysis used some statistically flimsy data.

Assuming a jump in capital investment, they found that the surge in illegal immigration reduced the wages of high school dropouts by just 3.6 percent. [More]

Even the load on government budgets by illegal immigrants may be overblown.

Professor of Law [12] writes that the belief that undocumented migrants are exploiting the US economy and that they cost more in services than they contribute to the economy is "undeniably false". Lipman asserts that "undocumented immigrants actually contribute more to public coffers in taxes than they cost in social services" and "contribute to the U.S. economy through their investments and consumption of goods and services; filling of millions of essential worker positions resulting in subsidiary job creation, increased productivity and lower costs of goods and services; and unrequited contributions to Social Security, Medicare and unemployment insurance programs."[13] [More]

Second, you'd think from the English-only and cultural competition talk, Americans believe in the importance of greater uniformity in beliefs than other nations.

Well, not according to this research.

The two survey items that speak to diversity asked respondents whether they agreed or disagree with these statements:

It is better for a country if almost everyone shares the same customs and traditions.

It is better for a country if there are a variety of religions among its people.

Below are plots of the percent of respondents in each country who endorse homogeneity — i.e., agree that everyone should share customs and traditions and disagree that a variety of religions is better. (See the paper for fancier plots with means and confidence intervals.) 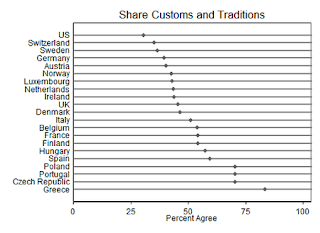 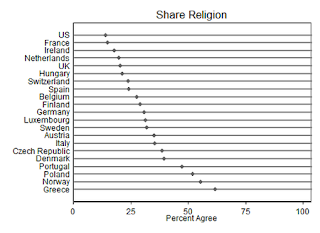 What's the deal with Greeks?

I think we allow what passes for public discourse on diversity to overcome the empirical evidence of the lives around us. And this survey demonstrates we may not be as intolerant as we can often appear in the media.
Posted by John Phipps at 4:53 PM

Email ThisBlogThis!Share to TwitterShare to FacebookShare to Pinterest
Labels: culture

Most people I know are pretty tolerant of others. that being said, most people would like to have our laws ENFORCED on our borders. Otherwise, what's the point of having a country.

What's the point of not having Shop Classes in Junior High & High school anymore to teach industry and trade to our students so they can aquire the jobs that the emigrants are filling so our young citizens can be rushed off to war, only to return disabled or worse, unable to re-aquire the jobs they left, so their employers could move to the country they're fighting in.