And I'm not talking about the Ferraro comment, either. Consider this finger-pointing remark by Pilgrim's Pride CEO J. Clint Rivers:

Pilgrim's Pride Corp., the world's biggest poultry processor, will close a U.S. chicken-processing plant, six distribution centers and cut 1,100 jobs because of surging feed costs that have put the industry into "crisis.'' The closing of the plant in Siler City, North Carolina, and six of the company's 13 U.S. distribution centers will be completed by June and result in charges of $21.7 million, or 33 cents a share, Pittsburg, Texas-based Pilgrim's Pride said today in a statement.

The company blamed higher costs for feed ingredients in January when it reported an unexpected net loss of $32.3 million, or 49 cents a share, in the three months ended Dec. 29. Pilgrim's Pride said today it's reviewing other production facilities for possible closings, citing an oversupply and a "crisis facing the U.S. chicken industry'' because of rising feed costs.

"Our company and industry are struggling to cope with unprecedented increases in feed-ingredient costs this year due largely to the U.S. government's ill-advised policy of providing generous federal subsidies to corn-based ethanol blenders,'' Chief Executive Officer J. Clint Rivers said in the statement.

"Based on current commodity futures markets, our company's total costs for corn and soybean meal to feed our flocks in fiscal 2008 would be more than $1.3 billion higher than what they were two years ago,'' Rivers said. [More]

I think this strategy is golden for the food industry - for two reasons.

1. The charts for most commodities are simply insane. (Wheat below) 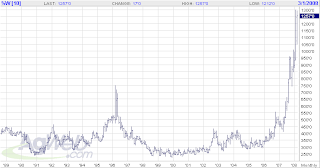 2. Ag producers have been taking credit (unfairly, I think) as the reason for low food prices for so long, they have huge reversal of position to pull off to avoid being tagged as the cause for high food prices. I mean, farmers didn't credit $20 oil for low food prices, so how can $100 oil suddenly be the real cause of food inflation now? Even though it's true?

There is even a risk in blaming foreign demand. With protectionist sentiment running way too high in the US, pointing out how China, et. al. are competing for commodities is just asking for an embargo.

Given the success food companies are having with this public relations angle, I look for more commodity-price bashing to become daily fare in the press.
Posted by John Phipps at 3:06 PM

You mention that the high prices and China demand are just asking for an embargo. Surely the present administration (or the next one for that matter) aren't so dim as to have forgotten how effective grain embargoes worked during the Carter administration are they? Although I must say memories get shorter all the time.

I was going to make a cute statement about "dimness" and politicians, but that is exactly the kind of radio-talk show response that I've wearied of.

If our economy stumbles more, and inflation - especially food - rises sharply while wages stagnate and jobs are lost, I would expect public leaders to seize on any idea that would give even false hope to Americans.

Embargoes at first glance look like they should help, ergo, I'm not ruling them out.

We have no recent history of taking the tougher but better road to solve economic problems.

I believe the oil embargo of 1973 was just a test to see what the market was willing to pay. There wasn't any shortage then and there isn't any now.