Batten down the hatches, or something, mateys...

I have been puzzling about this for several days.  How do a handful of yahoos in a rubber dinghy board and capture a gigantic oil supertanker?  I mean, I have trouble getting into a ski boat at the pier on a small lake.

So here's what I have learned to date:


Admiral Mike Mullen, chairman of the US Joint Chiefs of Staff, said the pirates were well trained.
"They're very good at what they do," he told a Pentagon briefing in Washington.

"Once they get to a point where they can board, it becomes very difficult to get them off, because, clearly, now they hold hostages." [More] 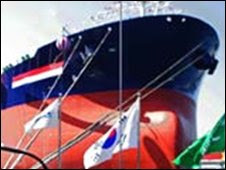 Okey-dokey, with you so far.  But how the heck do they get aboard?  Isn't this behemoth 4-5 stories tall?


The gangs’ methods vary little, even when taking a 320,000-tonne monster like the Sirius Star. Gunmen typically approach on small speedboats, opening fire on the bridge until the ship’s captain submits and allows them on board, usually throwing down a ladder. The average reaction time between spotting the pirates and being boarded is 15 minutes...
In recent months the pirates’ arsenal has grown more deadly, with rocket-propelled grenade launchers and possibly shoulder-mounted missiles used to threaten the crew. Pirate groups have hugely extended their reach from the coast with the use of “mother ships”, larger vessels from which they launch speedboats after they have identified their prey. While some known mother ships have been identified, other attacks are launched from ordinary dhows, traditional sailing boats hijacked from fishermen.[More]

Ships I'm familiar with of that size have steel storm covers for their windows and portholes. Given the electronic auto-piloting, how hard would it be to just cover up and plow on?

Obviously I'm missing something here. But this system looks like sending your kid sister through the tough part of town to deposit your lottery winnings, and then wondering what went wrong.
Posted by John Phipps at 2:34 PM

Email ThisBlogThis!Share to TwitterShare to FacebookShare to Pinterest
Labels: oil