I sense many of us are breathing a little sigh of semi-relief, and anticipating a steady recovery from the current credit crisis/financial meltdown.  I know I was.

Until I saw this. 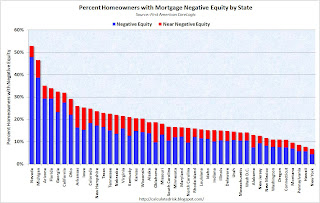 The memories of the 80's still haunts me, as I fudged my land values to get the right answer, and my banker pretended not to notice.  But we farmers were a small part of a big economy, and this is homeowners all over the US.

No I don't know how this will unwind.  But consider the case of Iceland, which I mentioned earlier.


The details of the financial settlements in Iceland are still unclear but the FT reports that the International Monetary Fund plans to lend Iceland $6bn. The British government reportedly is contemplating lending Iceland £3bn, which the country must then use to compensate individual Icesave depositors in Britain. The Dutch have offered Iceland a similar deal, involving €1.1bn. And there are more loans and foreign obligations in the pipelines.

These loans correspond to a little less than one half of the support that Hungary is receiving to deal with its financial crisis. Hungary has a population of 10m; Iceland, 320,000. The government of Iceland has now been offered foreign loans that roughly equal the country's gross domestic product. The annual interest payments, say 3-4 per cent, approximately correspond to the country's annual economic growth. Additionally, the loans must be paid up.

The burden is unrealistic. The most likely consequences are: extremely high inflation, economic decline, mass emigration and political disorder. I am reminded of the situation facing Germany in 1919 following the Versailles Peace Treaty, which John Maynard Keynes famously analysed in Economic Consequences of the Peace. [More] [More]

The connection between the two?  Both are unprecedented economic developments, and both have economists scratching their heads.

It seems they are better at autopsies than treatments.
Posted by John Phipps at 5:38 AM