For all my fellow Illini...

In case you're a downstate resident, you might want to review this graph of Illinois population distribution and then ask why we even bother to send anyone to Springfield. 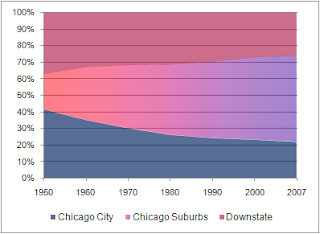 And then the cheapest shot of all - and I'm counting the Wright fiasco - choke on this reminder to baseball fans:


Jubilation if and when Obama wins the Presidency, culminating in a rally in Chicago's Grant Park that may draw one million souls. It's not a Cubs' World Championship, but most Illinoisans will take it; what kind of odds could you have gotten in 1908 that a black dude would get elected president before the Cubs won the Series again? [My emphasis]

On the positive side, we haven't had to watch/listen to hardly any national political ads - only the increasingly strident and caustic local races.