Blowing in the wind...

As many of you know, I am concerned the appearance of something-for-nothing has utterly confused the concept of wind energy.   Yeah - we know how to generate electricity from wind, and every day we get better at it.  But for the umpteenth time - that is not the major issue!

The issue is getting those amperes to your grain bin fan or Wii controller.  It's the GRID, people.


Let’s take a look at what’s going on here.  The first premise is that, by conveying real-time pricing the smart grid will encourage people to redistribute their consumption of electricity to off-peak hours of the day.  This will “level loads” and solve the perennial problem of utilities in meeting demand that occurs a few hours of the day or a few days of the year.

The second premise is that the smart grid will help integrate wind and solar energy - the two balky “renewables” that have the disadvantage of not being dispatch-able when we want them.  With the smart grid, wind and solar generation will always be available somewhere and so can be conveyed to where it’s needed.

Notice these are different things.  The true “smart grid” will be a digitalized distribution system that conveys real-time information.  Incorporating remote wind and solar, on the other hand, will require an upgraded grid, something entirely different.  Our present 345-kilovolt, AC transmission wires can’t do it without unacceptable line losses.  We will need to rebuild to 765 kV DC system – something that could take decades and easily cost several trillion dollars.

One has very little to do with the other.  However they are often described as the same thing.  Thomas Friedman effortlessly conflates them in Hot, Flat and Crowded when he writes:


[The smart grid] has made large-scale renewable energy practical for the first time ever.  Why? Because the flatter your utility’s load profile gets, the more it is able to go out and buy or generate renewable energy and sell it to you and your neighbors instead of energy powered by coal or gas.


This is not true.  A flattened utility profile has nothing to do with incorporating wind and solar.  In fact it is just the opposite.  The one great virtue of solar energy is that it peaks exactly when it is needed – in mid-afternoon and on hot summer days.  If we level loads, we will be taking away solar electricity’s greatest advantage.

Let’s go back and examine these issues one at a time.  First, start with the premise that the smart grid will enable us to redistribute energy consumption throughout the day.  It’s fitting that the girl is standing in front of a clothes dryer because that and washing dishes are the only examples anyone has ever been able to come up with about how residential users are going to “redistribute” their energy consumption.
...

Wind, of course, is an entirely different animal.  Although  completely unpredictable, the wind does tend to blow stronger at night and in the fall and spring, exactly when it’s not needed.  A strong, steady wind in North Dakota might allow Illinois to cut some coal consumption but it won’t obviate the need for fossil fuels because the wind will always need backup.  “The Green Grid” concludes that wind will work best in tandem with - wouldn't you know it - natural gas turbines.  They can be adjusted instantly to compensate for the wind's vagaries.

So the prospect that a smart grid is somehow going to save huge amounts of energy and pave the way for a solar future is an illusion.  At best it will make electricity a bit cheaper and perhaps shave 5 to 10 percent off the anticipated growth in consumption.  But the smartest of smart grids can’t distribute power that isn’t already there. [More]

Now imagine they want to build that huge new transmission system across your best land.  The thrill sorta vanishes, doesn't it?  Our leadership failure to explain what is really going on, and to focus public attention on turbines as a problem solved is political duplicity at its worst, IMHO.

Farmers (and recently wind fever has hit here) see this  - very understandably - as another "ethanol", where government subsidies fill their pockets under the cover of virtuous environmental policy.  Wind energy is one very small source for our future energy needs, but until we do the ugly and expensive part of wiring our world, it will amount to little more than another fiscally loopy program.  This goes ditto for all those dairy methane digesters the farm press is suddenly in love with.

Incidentally, stimulus package opponents need to present their plan to get the grid rebuilt utilizing tax cuts and private enterprise.  Like roads and police, my opinion only the government can get this job done, due to the issue of over coming individual resistance for a common good.

Now look at some energy reality: 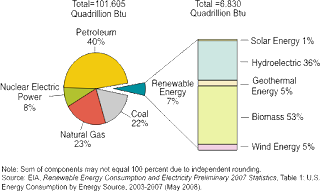 Of course, all this matters little, if you are the lucky farmer who gets a subsidized generator check. Wind energy is also powerful tool to enrich wind turbine manufacturers.  But keep an eye on usable MW generated whilst we continue to use fossil fuels and you might wonder why this GSB* ever got started before figuring out how to hook it up.

Maybe the thinking is if we build all these thousands of turbines, eventually somebody else will have to pay for a grid.  ["Built it and they will wire"]

All I keep seeing however, is a 90-foot homemade yacht in a barn in Nebraska.


*Government Sponsored Boondoggle
Posted by John Phipps at 8:28 AM

in ontario the only reason to build wind turbines for electrical generatation is overly generous gov't money.. generally people want them if they are the ones getting the "payment or rental"...and there is some weird 20+ year re-newable leases--enough said-regards-kevin

John: Your view of the wind turbine situation is well put. To add to the chat, the situation with methane digesters is as bizzare. We do a substantial amount of business with the Northern Indiana dairys. Our experience is that the cost of the "free" energy is so expensive that our customers are just selling the gas to the gas company, rather than bothering to generate their own power. Yes methane has its place, but is is EXPENSIVE to install, operate and maintain a biodigester for power production. The best example of this is "Bio Town USA" Renolds Indiana. They had a plan to install digesters for hog manure, and power the "entire town" with the ouput. The area banks could not support the amazing cost of installation and maintenance, hence the deal fell through and ........ you guessed the rest.
So much for the free energy.

John: You miss the point that our peak electrical use will be at night recharging all the electrical cars,trucks,tractors and airplains.