The field is growing...

The field of choices for e-readers.  While I am very happy with my Kindle, some other choices are rolling out. 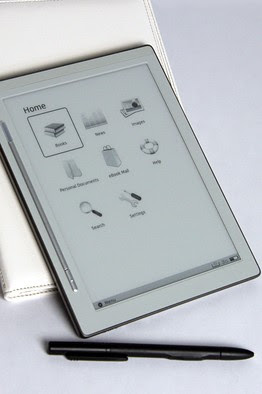 On Wednesday, iRex Technologies, a spinoff of Royal Philips Electronics that already makes one of Europe’s best-known e-readers, plans to announce that it is entering the United States market with a $399 touch-screen e-reader.
Owners of the new iRex DR800SG will be able to buy digital books and newspapers wirelessly over the 3G network of Verizon, which is joining AT&T and Sprint in supporting such devices. And by next month, the iRex will be sold at a few hundred Best Buy stores, along with the Sony Reader and similar products.


By all accounts, e-readers are set to have a breakout year. Slightly more than one million of them were sold globally in 2008, according to the market research firm iSuppli. The firm predicts that 5.2 million will be sold this year, more than half of them in North America, driven by the popularity and promotion of the Kindle, which is available only through Amazon’s Web site. [More]


But wait - there are more coming!

It is hard to explain to others how fundamentally my Kindle has altered my approach to reading. That evolution is just beginning.  Where these devices can take us is pretty mind-boggling.


For starters, think about what happened because of the printing press: The ability to duplicate, and make permanent, ideas that were contained in books created a surge in innovation that the world had never seen before. Now, the ability to digitally search millions of books instantly will make finding all that information easier yet again. Expect ideas to proliferate -- and innovation to bloom -- just as it did in the centuries after Gutenberg.


Think about it. Before too long, you'll be able to create a kind of shadow version of your entire library, including every book you've ever read -- as a child, as a teenager, as a college student, as an adult. Every word in that library will be searchable. It is hard to overstate the impact that this kind of shift will have on scholarship. Entirely new forms of discovery will be possible. Imagine a software tool that scans through the bibliographies of the 20 books you've read on a specific topic, and comes up with the most-cited work in those bibliographies that you haven't encountered yet. [More]


It could be e-readers will simply be precursors to yet another smart-phone function, but the physical screen size would require different old eyes than mine.  In order to get the font large enough to see on my Blackberry, for example, I could only read words of about 7 letters or so (heh).

The rapidly approaching moment is finding a universal format so the millions of books Google has scanned and those Amazon sells can be downloaded to any e-reader.  Given the frustrating fractionation of our communications industry that sync-up could be too long in coming for my taste.

Even more curious is the idea that reading and writing may not have been made extinct by talking. When phones made letters virtually obsolete, the last thing any of us imagined was the text handling features would become as popular, i.e. Twitter.  In fact, my generation may be a low point in reading and writing compared to talking.

Like many small technology changes with disproportionately huge implications, today's e-readers could be one of those things we look back on like our bag-phones.

...maybe you can get a cable to go from your Kindle to your Big Screen TV. And, perhaps one of those LED projector Fighter Pilot lenses for the Blackberry. To paraphrase...If you build it, wait, they will make an adapter before long...
Gettin close to harvest yet, Mr. John??

Obviously Star Trek was once again an accurate predictor--communication is not necessary when the collective holds all knowledge and you are part of the collective.