Sorry about the slow posting....

I've been out in my fields with a metal detector. 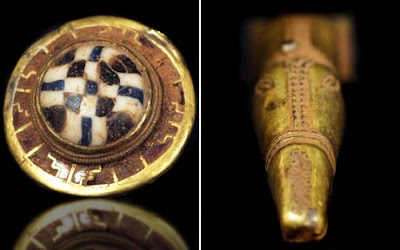 The snaking line of more than 1,000 people queuing to enter the Birmingham Museum and Art Gallery on Friday afternoon illustrated perfectly the surge of interest sparked by the announcement — just a day before — of the largest hoard of Anglo-Saxon treasure ever discovered.
Among those queuing to see the artefacts was Allison Buckley, 47, from Stafford. “It is almost as exciting as queuing to see the treasures of Tutankhamun,” she said, recalling the rush to see the Egyptian boy king’s death mask in London in 1972. “What makes this so exciting is that it has just been unearthed. There is still soil on the pieces and you can imagine it in the ground.”
The Anglo-Saxon treasures were chanced upon in a Staffordshire field by Terry Herbert, a 55-year-old unemployed metal-detection enthusiast. The find — almost 1,500 gold and silver items thought to date from the 7th or 8th century — has staggered archeologists. It will, experts say, completely reshape our understanding of the Dark Ages. [More]


Whaddaya think metal detector sales are doing in the UK right now?  They were already pretty good.
Posted by John Phipps at 4:07 PM

Email ThisBlogThis!Share to TwitterShare to FacebookShare to Pinterest
Labels: history