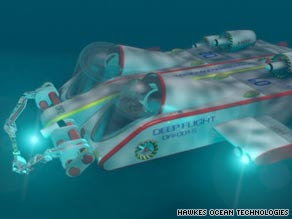 The "Deep Flight" winged submersibles are experimental prototypes designed to dive to depths of up to 37,000 ft -- almost four times as deep as a giant squid dives -- descending at 400 ft/minute.

They are the brainchild of submarine designer Graham Hawkes who is in the process of building commercial models that can reach those depths.
Hawkes has been designing submarines since the 1960s, working initially with the British Special Forces and then for the oil industry.
He now sells his designs to wealthy sailboat owners as the ultimate yacht accessory.
"If you have the money for a mega-yacht and you're just limited to the surface, then what a waste. That's my perspective," Hawkes told CNN in a telephone interview.
The late billionaire balloonist and adventurer, Steve Fossett, commissioned one of Hawkes' experimental prototypes, "Deep Flight Challenger," which can dive to 37,000 ft. The craft was four weeks away from delivery when he died.

Venture capitalist Tom Perkins has ordered one of Hawkes' first commercially-available models, "Deep Flight Superfalcon" for his yacht "Maltese Falcon." The $1.5 million sub is capable of diving to 1,000 ft and comes complete with air conditioning. [More]

It's really hard to build stuff to hold back 7 miles of water.  The idea some plastic bubble would work is idiotic hard to believe.

Email ThisBlogThis!Share to TwitterShare to FacebookShare to Pinterest
Labels: science

This is like the veritcal take0off flying car that has yet to make production. Shoot they haven't yet got one that isn't a poor compromise car or airplane for normal take-off.
I don't even believe a 200 foot depth capable submarine. Remember it is stone black at that depth.

Dear J, Subs work by equalizing pressure inside and out to go to any serious depth. Still, I doubt this small sub has room for all the neccessary apparatus for those kind of depths.

Umm - no they don't. There must be a pressure hull to allow humans inside to exist at something like 15 psi.

They do flood ballast tanks to control bouyancy, but those are outside the pressure hull.

Check out the short stories under the History column. I'm not sure how they got that third crew assembled....