Not being a fan of cash, I virtually always smile at lower interest rates, but those who do constantly parrot "Cash is King!" even in the face of mountains of contrary evidence have a new worry. Who will buy our massive new issues of US debt? After all, famed money manager Bill Gross at PIMCO has unloaded his bonds.

I don’t know. Reserve surplus sovereigns are likely good for their standard $500 billion annually but the banks are now making loans instead of buying Treasuries, and bond funds are not receiving generous inflows like they were as late as November of 2010. Who’s left? Well, let me not go too far. Temporary voids in demand are not exactly a buyers’ strike. Someone will buy them, and we at PIMCO may even be among them. The question really is at what yield and what are the price repercussions if the adjustments are significant. Fed Vice Chairman Janet Yellen in a speech just last week confirmed the theoretical rationale that Treasury yields are directly linked to the outstanding quantity of longer-term assets in the hands of the public. If that quantity is suddenly increased in one year as the charts imply, what are the yield consequences? What I would point out is that Treasury yields are perhaps 150 basis points or 1½% too low when viewed on a historical context and when compared with expected nominal GDP growth of 5%. This conclusion can be validated with numerous examples: (1) 10-year Treasury yields, while volatile, typically mimic nominal GDP growth and by that standard are 150 basis points too low, (2) real 5-year Treasury interest rates over a century’s time have averaged 1½% and now rest at a negative 0.15%! (3) Fed funds policy rates for the past 40 years have averaged 75 basis points less than nominal GDP and now rest at 475 basis points under that historical waterline.
As a counter, one would argue (and I would partially agree) that the U.S. and indeed developed global economies must keep yields artificially low for some time if post Lehman healing is to take place. But that of course is the point. By eliminating QE II, the Fed would be ripping a Band-Aid off a partially healed scab. Ouch!  25 basis point policy rates for an “extended period of time” may not be enough to entice arbitrage Treasury buyers, nor bond fund asset allocators to reenter a Treasury market at today’s artificially low yields. Yields may have to go higher, maybe even much higher to attract buying interest.
Investors should view June 30th, 2011 not as political historians view November 11th, 1918 (Armistice Day – a day of reconciliation and healing) but more like June 6th, 1944 (D-Day – a day fraught with hope for victory, but fueled with immediate uncertainty and fear as to what would happen in the short term). Bond yields and stock prices are resting on an artificial foundation of QE II credit that may or may not lead to a successful private market handoff and stability in currency and financial markets. 15% gratuities may lie ahead, but more than likely there is a negative two-bit or even eight-bit tip lying on the investment table. Like I did 45 years ago, PIMCO’s not sticking around to see the waitress’s reaction. [More]

With celebrity endorsements like that, should we be fretting about rising interest rates looming in the near future?

Maybe not. I submit for evidence what happened during the earthquake: yet another charter flight to "safety".  Which apparently most think we still represent.


Treasury prices fell Thursday as a lack of any major negative developments in the Japan nuclear crisis allowed for a break in the bond market's recent flight to safety rally.
U.S. government bond market prices dropped as Japanese workers continued to work to try to stabilize conditions at the country's Fukushima Daiichi nuclear plant, which was damaged in last week's massive earthquake. Military helicopters were brought in to douse water on overheating fuel stores and officials at Tokyo Electric Power Co. reportedly said they hope to soon restore power to the facility, which could allow cooling pumps to be restarted.
In recent trading, the benchmark 10-year Treasury note was down 15/32 to yield 3.263%. Thursday's losses came after a sharp rally Wednesday that took the benchmark 10-year yield down to 3.138%, a level last hit in December. The two-year was down 3/32 to 0.613%. [More]

But it does illustrate some pretty wild swings in the bond market as evidenced by who is buying our debt. 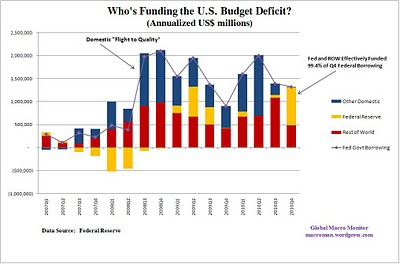 
If you can't read the chart text, what we're looking at here is quarterly purchases of American debt. The blue portions are non-Fed American buyers, the yellow bit is the Fed, and the red bit is foreign purchases, many of which are made by foreign central banks.
Who will buy Treasuries when the Fed doesn't? Based on the above, it looks to me as though Fed purchases have largely crowded out other buyers, and when the Fed has previously pulled back, those other buyers have stepped back in. Non-Fed domestic purchases soared between the fourth quarter of 2009 and the second quarter of 2010. What kind of interest rate rise was necessary to induce this increase? Not much of one; yields rose perhaps 10% over the period.
Could things be different this time around? Sure. The American economy seems to be on a much stronger footing than it was a year ago. Other investment opportunities will look more attractive. On the other hand, conditions elsewhere look less inviting. European interest rate increases could make some European bonds more attractive, but they'll also push the euro zone toward new crisis flare-ups, which tend to boost Treasury prices. Instability in the Middle East and crisis in Japan have also provided support to Treasuries. Do we think that smoother sailing is ahead?
It's also worth noting that unexpectedly strong growth will mean a more rapid decline in the federal deficit, which will help on the supply side. I think Treasury yields are far more likely to rise than fall. After all, they're really, really low right now! And if you hold billions in Treasuries and want to sell at the bottom, then it's hard to blame you. But I tend to think that until the global recovery looks more durable, and until global geopolitics calm down, there will be plenty of buyers ready to take ownership of one of the world's safest assets. Things now aren't obviously so much better than they were last spring, such that a much bigger rise in yields will be necessary to bring non-Fed buyers back into the market. In my view. [More]

Bottom line: we'll either have to get used to daily news shocks, or investors will cling like Saran Wrap to US bonds. Old habits die hard, and there still isn't a safer alternative.

Which gets me back to why anyone would want to be cash heavy in the new global economy. It also reinforces my tendency to ask interest rate hawks what their investment mix is, since it looks to me like those seeing astronomical rates in the future are engaging in wishful thinking.
Posted by John Phipps at 8:17 AM