The new fear word for deficit hawks is broke.  And they can't utter it often enough.


House Speaker John Boehner routinely offers this diagnosis of the U.S.’s fiscal condition: “We’re broke; Broke going on bankrupt,” he said in a Feb. 28 speech in Nashville.
Boehner’s assessment dominates a debate over the federal budget that could lead to a government shutdown. It is a widely shared view with just one flaw: It’s wrong.
“The U.S. government is not broke,” said Marc Chandler, global head of currency strategy for Brown Brothers Harriman & Co. in New York. “There’s no evidence that the market is treating the U.S. government like it’s broke.”
The U.S. today is able to borrow at historically low interest rates, paying 0.68 percent on a two-year note that it had to offer at 5.1 percent before the financial crisis began in 2007. Financial products that pay off if Uncle Sam defaults aren’t attracting unusual investor demand. And tax revenue as a percentage of the economy is at a 60-year low, meaning if the government needs to raise cash and can summon the political will, it could do so.
To be sure, the U.S. confronts long-term fiscal dangers. Over the past two years, federal debt measured against total economic output has increased by more than 50 percent and the White House projects annual budget deficits continuing indefinitely.
“If an American family is spending more money than they’re making year after year after year, they’re broke,” said Michael Steel, a spokesman for Boehner.
A person, company or nation would be defined as “broke” if it couldn’t pay its bills, and that is not the case with the U.S. Despite an annual budget deficit expected to reach $1.6 trillion this year, the government continues to meet its financial obligations, and investors say there is little concern that will change.[More]

It is the equating of a sovereign nation to a household that creates this misapplication of the concept, I think. That and a poor understanding of public finance.

Still, as has been pointed out by experts like Bruce Bartlett, and the above article, there is no argument in the bond market. To be sure, predicting higher interest rates is a sure winner if you don't specify at time, but we've already got plenty of commodity analysts working that angle (Better buy options!!).

It will be interesting to see how effective this demagoguery to achieve what are essentially targeted attacks against political foes, such as we see with teacher unions. It looks like union-busting may be on a roll, despite public sentiment in the other direction, and screaming "broke" will be one of the tools used. In the case of states, it is actually a more accurate term, but again the test is bond ratings.

What I'm trying to figure out is how our school system will adapt to this. We're already recruiting below the top for teaching (not all teachers, of course, but in general) and wiping out collective bargaining, possibly tenure, and other perks probably will accentuate that trend. 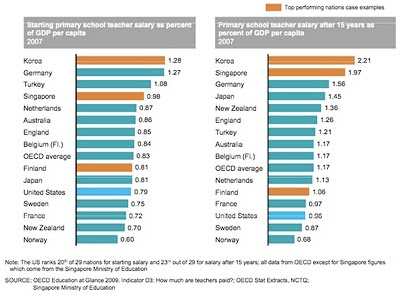 The second thing I know for sure is that we'll never attract the kind of talented young people we need to the teaching profession unless it pays far more than it does today. With starting teacher salaries averaging $39,000 nationally, and rising to an average maximum of $67,000, it's no surprise that we draw teachers from the bottom two-thirds of the college class; for schools in poor neighborhoods, teachers come largely from the bottom third. We're the only leading nation that thinks it can stay a leading nation with a "strategy" of recruiting mediocre students and praying they'll prove excellent teachers.

And I know one more thing - which is as inconvenient for me to acknowledge as it should be for others who've criticized archaic teacher union practices in the United States. The highest-performing school systems in the world - in places such as Finland, Singapore and South Korea - all have strong teachers unions. Anyone serious about improving American schooling has to reckon with this paradox: Unions here are often obstacles to needed reform, even as the world's best systems work hand in glove with their unions to continually improve their performance. [More of a helpful article]

I really don't have much affinity for unions per se, but cannot agree they represent the threat currently being attached to them. This looks like a group-scapegoating, and blatantly politically targeted. Plus it may backfire - nothing like an attack to rally the troops.

Lost in all this is what it means longer term for a government to turn pretty harshly on its own workers and how that suggests it will function in the future. Like Shakespeare's suggestion to "Kill all the laywers", tactics like this are really just good for applause or laughs on stage, not public policy, IMHO.
Posted by John Phipps at 8:11 AM

Normalize the reported starting salary to account for the fact a teacher works 3 to 3-1/2 months less than the average professional.

I'm not located in rural Illinois, but the average teacher salary in our school district is in excess of $80,000.

Wow Tim, where do you live? I'm located in N. IN in a school district with the 2nd highest assesed valuation in the state. Our average teacher salary is $42,000. My wife has only 6 weeks out of school in the summer in which she must get in the hours for continuing education to remain certified(Paid for by her own $'s). She is to work by 7 AM and gets home around 5 PM unless she has school related meetings (around two per week). Our Gov. Daniels calls teachers the "Priviledged elite". ???
Four years ago he raised our sales tax by 16% so the state would take over the General Funds of schools that pay salaries. Of course those reciepts started tanking in "08. Now our local property taxes can only be used on capital projects. Property taxes were supposed to go down--farmers have seen theirs rise.
The Republican Govenors seem to be in a contest to see who can grab the most power and demean employees.