Our own worst enemy...

All the posturing and angry rhetoric about the federal budget is almost certainly ensuring we don't make any progress for 2-3 years to come. The reason is the legislative process and especially freshman legislator ignorance of it.


Second, and perhaps more importantly, unless Congress comes together on a budget resolution, it’s almost impossible to make significant progress on cutting entitlement programs such as Medicare and Medicaid. The reason? A completed budget resolution is necessary to enable a special legislative procedure called reconciliation.
Reconciliation allows Congress to force itself to cut spending. In the budget resolution, congressional committees must report legislation that would cut spending or raise revenues, neither of which they like to do. If they fail to act, however, the Budget Committee can circumvent them. This tends to force the hands of the traditional committees of jurisdiction.
The Budget Act provides for expedited procedures in both the House and Senate for consideration of legislation that arises through reconciliation. The legislation may not be filibustered in the Senate. There is a fixed time available for debate, established by law, and the final legislation only requires a simple majority. This is critical, given that Republicans routinely filibuster everything in the Senate and it requires 60 votes to limit debate.
Needless to say, it would be a simple matter for Senate Democrats to play the Republican game and filibuster any big budget-cutting bill sent over by the House even if Democrats didn’t control the Senate. So reconciliation is absolutely essential if Republicans expect to make good on their promises to slash spending and balance the budget. That’s why it’s necessary to have a completed budget resolution agreed to by both the House and Senate; both must agree on spending levels and reconciliation instructions.
And this is why almost every budget expert in Washington believes that Republicans are being extraordinarily foolish, even childish, in wasting so much of Congress’ precious time on the 2011 budget. The potential for significant savings is inherently limited when almost half the fiscal year is past and two-thirds of total spending is off-limits.
Is Simple Ignorance to Blame? If they had any sense, Republicans should have accepted that it was too late to do much of anything about the 2011 budget the day Congress reconvened in January and put all of their energy into the 2012 budget, including a binding budget resolution with reconciliation instructions. But because they’re still finishing leftover business from last year, they are going to be severely behind the 8-ball in terms of doing what needs to be done to both finish the 2012 appropriations on time or do anything about entitlements.
I think it’s mostly simple ignorance about how the budget process works that is preventing House Republican freshmen from accepting that they simply can’t do everything they promised they would to rein in spending right now. House veterans know that the freshmen have bitten off more than they can chew, but are too frightened of retaliation by the Tea Party to say so. In a few months, when the freshmen have finally exhausted themselves with futile efforts to balance the budget instantly, they’re going to greatly regret that they didn’t develop a long-term plan and properly use the budget process, which was created to do exactly what they claim they want to do: get the nation’s finances in order.
[More]

I'm taking no joy in this grim forecast, even though I think it is not the best economic path to follow right now. Austerity budgets from the states may be enough to tip us back into recession. But I do fault debt crusaders for failing to understand their job and instead simply sloganeering.


It turns at that obstructionism isn't good training for actually accomplishing anything. True, we may starve several programs or agency like the EPA, but even that doesn't appear to be well thought out. For example, meat inspectors will be cut right when our protein sector is struggling with nosebleed feed costs.
"Congress isn't changing law requiring constant presence of inspectors in slaughter plants and daily in processing," noted Tucker-Foreman, in an email response to Food Safety News. "In a desire to meet commitment to produce big cuts in budget fast they're setting up collision between irresistible force (campaign promises) and immoveable object (the current law)."

"It's bad news for consumers," said Tucker-Foreman. "Disruptions in inspection are likely to increase risk of contamination and could push up prices."

"Bad for farmers and ranchers who won't be able to get animals inspected and will have to keep feeding them [and it's] a special threat to small processing plants," she added.

One FSIS inspector, who is not authorized to speak on behalf of the agency, expressed similar concerns.

"On the inspection side, we'll see increased workloads due to unfilled vacancies at plants needing coverage. We already have more inspectors retiring than we're hiring," wrote the inspector in an email. "We won't be able to focus attention where it's needed because we'll feel like we don't have the time."

The inspector also noted that small plants could be disparately impacted. "Small plants that only work two days a week might not get covered. If there's no inspector, they can't run... Jobs will be lost."[More]

The axe-wielding budget hawks are ignoring where cuts must come from (entitlements), and also that our budget problem is complicated by plunging revenues more than out of control spending. 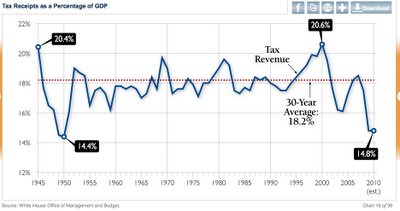 Cutting our way back to recession will powerfully increase that problem.

Hey John,
Any comments about your old buddies (NCGA) and their policy inititives at CC? Let me see...they are offering to sacrifice both direct payments and VEETC in order to help lead the way to deficit reduction. Comments?

Do meat inspectors really reside in the EPA. I think not (therefore I am not ?)

Cut the Representatives some slack. They have always been a congress of small thinkers. At least the majority has the big picture right.

No the Representatives do not have the big picture right and it is now apparent they were not qualified for the job either. They came in with little knowledge of the fundamentals of government and the legislative process. They are a demolition crew who think they can be interior decorators using a chain saw. But for now we are stuck with a critical mass of these Congressional simpletons and it will take a long time to set this right.

I left Friday before the issue was revived. Just read about it after your comment. Also the remodeling has hit some snags. I'll try to post my impressions soon.

The linked article gets it right. The sentence is about agencies "like" the EPA, and uses meat inspectors as an example. That's why I link to the source - extracts never give the whole story.

It remains to be seen how this Congress performs, but my guess is governing will be difficult without some attitude changes. Winning elections is relatively easy in comparison.