One of the biggest casualties of the commodity boom has been serious degrading of our whining power in agriculture. After all, farm income is setting records for more as sub-sectors like livestock slowly adjust to feed costs, and we grain farmers are still polaxed by our good fortune.

The problem becomes how to portray ourselves as victims now?  This is the only public image we seem to be comfortable with, and it under-girds our sense of entitlement.

Enter the Great Regulation Oppression. It would appear that the evil EPA had been timing their unjust moves to help us at this moment, although oddly, like most other businesses, over-regulation wasn't very high on our list until we began making the big bucks. 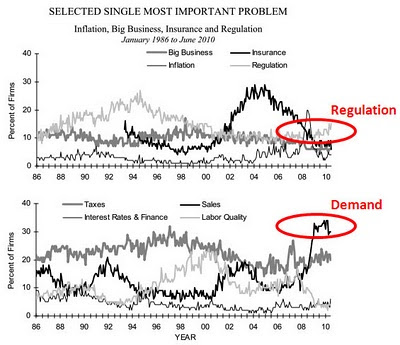 Over-regulation is the fallback complaint when times are good, I would submit.

More revealing to me are the anti-regulatory screeds that totally omit any discussion of the problem being regulated. One example:


Shaffer said EPA’s over-reaching focus on agriculture is particularly troublesome because agriculture has worked successfully with the Agriculture Department to reduce its environmental impact on the Chesapeake Bay.
“Use of crop inputs is declining,” Shaffer said. “No-till farming has reduced soil erosion and resulted in more carbon being stored in the soil. Milk today is produced from far fewer cows. Nitrogen use efficiency has consistently improved. Farmers are proud that their environmental footprint is dramatically smaller today than it was 50 years ago, and we are committed to continuing this progress.”
Shaffer, a Columbia County (Pa.) green bean, corn and wheat farmer, said agriculture’s success in reducing nutrients in the Chesapeake Bay is well documented, but EPA has ignored the substantial effort and progress of recent years. A new report from USDA’s National Resource Conservation Service outlines the progress made by agriculture.
“EPA moved forward with an aggressive and unnecessarily inflexible new plan to regulate farming practices in the Chesapeake Bay watershed,” Shaffer said. “In the last two years, EPA has set in motion a significant number of new regulations that will fundamentally alter the face of agriculture, not just in the bay, but nationwide. These new regulations will determine how farmers raise crops and livestock and will increase the likelihood of expensive lawsuits filed by activist organizations.”
Shaffer warned that policies already in place or being considered by EPA will greatly extend federal control over crop farmers and livestock producers, regardless of their size or footprint. [More]

What I see missing are any stats on the health of the Chesapeake Bay. Is it getting better or worse? Did the actions touted above have the desired effect? AFBF rarely mentions environmental problems other than to state they are not farmers' fault.

The reason given is more regulation is going to raise our costs.

Well, duh. This is because, in many cases, we have been passing the environmental costs to the future or the general public as economic externalities. Having to actually pay for cleaning up our messes will impact our bottom line, but it may make  a lot of other bottom lines much better.

While I see Great Regulatory Harangue as primarily a campaign for farmers and farmer organizations to regain our victimhood, many of these regs or action may actually be ill-advised or unnecessary. But I would be more convinced by facts and arguments about the actual problem the regulations try to address, not just the farmer costs involved.
Posted by John Phipps at 7:06 AM

Email ThisBlogThis!Share to TwitterShare to FacebookShare to Pinterest
Labels: regulation

I live in the Chesapeake Bay Region. The water quality moved from a D to C- this year some signs of improvement. My opinion is the biggest help is the loss of dairy farms which if have ever visited one it is obvious they are messy.

The state also has enacted a flush tax and the funds are going into upgrading sewage treatment plants I beleive this is helping also.

Many years of BMP by the farmers in Maryland did little to raise the grade.

Speak for yourself Phipps. Don't call me a whiner. You whine about whiners.

Yup John is right. Farmers are professional whiners although they have a self image of being tough, stoic and independent. Glad to see your comments John. You bring a refreshing note of realism to this time of fraud, deception and self delusion.

John,
Regulations wrought from true need ...I can support. Regulations which are redundant or foisted upon us with no clear reason....not so much. Example, Indiana has a new reg. coming where anyone hauling any fertilizer to the field now must pass a test and be certified. I have asked several folks, including a congressman why this is necessary? No clear answer yet. Has there been a problem and I missed it? If it aint broke, don't fix it!
Over production cheapens everything...including regulations.