Stuff you never knew about the history of butter.


There is no evidence that the Romans used butter in their cuisine, (no form of butter appears in the ancient Roman cookery book Apicius) preferring olive oil, but used pure butter “medicinally”, including for making the skin “pliable” and in other situations that are too easy to imagine to be described here. Pliny suggests using it with honey for teething infants (which at least has deliciousness to recommend it) and Galen suggests using it as lamp fuel and then putting it on the eyes to cure inflammation and (presumably) sightedness. In Tablet VIII of The Epic of Gilgamesh, written some four thousand years ago, Gilgamesh makes an offering of purified butter to Shamash, the Babylonian sun god. (the gods, it was known, have no interest in milk solids). These days we usually call this sort of butter “ghee” or sometimes “clarified butter” (clarified butter, which the French quietly use a great deal in baking, has been cooked to boil off excess water, but not long enough for the milk solids to brown) to differentiate it from what we now think of as “butter,” but for millennia it was just butter.


Impure butter was viewed by the Greeks and Romans as a sure sign of barbarism and an invitation to be “civilized.” The Northern peoples were presumed to coat themselves in butter for reasons that ranged from the medicinal to the deeply troubling. The expression “as revolting as a butter-headed Burgundian” (Aussi révoltante que bourguignon avec du beurre dans ses cheveux) dates from this period, and some scholars have suggested that the French reputation for rankness is also butter-related. It was only after the fall of Rome that it slowly became acceptable to eat butter in polite company. By the Middle Ages, German and French butter fanatics would actually bribe their priests to allow them to eat butter during Lent, until, under pressure from the pro-butter Protestants, the Catholic Church allowed the consumption of butter during Lent during the 16th century. [More]

From Gilgamesh to Julia Child, butter enthusiasts have been spreading it thick. And unlike fluid milk consumption, we're eating more of it. 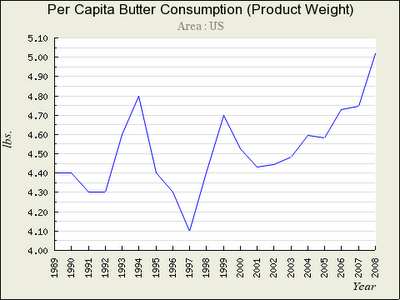 I'm not sure what happened in the mid 90's - was it a diet craze? I grew up on margarine, and actually preferred it. Jan was a butter person. Like all so many things, I soon came to align my preference with Jan's.

It's just easier that way...

[via sullivan]
Posted by John Phipps at 6:51 AM

I think the number scale, not starting at zero, on the Wisconsin graph makes it look pretty dramatic. The butter consumption graph in this USDA publication looks a little calmer. I do remember, though, this was in the good old days before ethanol, when livestock price cycles followed grain price cycles. Probably ran butter up high enough to kill demand.