My support for nuclear power has not diminished because of the Japan accident.

Perversely, some former critics have rethought their position in light of this tragedy.


You will not be surprised to hear that the events in Japan have changed my view of nuclear power. You will be surprised to hear how they have changed it. As a result of the disaster at Fukushima, I am no longer nuclear-neutral. I now support the technology.
A crappy old plant with inadequate safety features was hit by a monster earthquake and a vast tsunami. The electricity supply failed, knocking out the cooling system. The reactors began to explode and melt down. The disaster exposed a familiar legacy of poor design and corner-cutting. Yet, as far as we know, no one has yet received a lethal dose of radiation.
Some greens have wildly exaggerated the dangers of radioactive pollution. For a clearer view, look at the graphic published by xkcd.com. It shows that the average total dose from the Three Mile Island disaster for someone living within 10 miles of the plant was one 625th of the maximum yearly amount permitted for US radiation workers. This, in turn, is half of the lowest one-year dose clearly linked to an increased cancer risk, which, in its turn, is one 80th of an invariably fatal exposure. I'm not proposing complacency here. I am proposing perspective.
If other forms of energy production caused no damage, these impacts would weigh more heavily. But energy is like medicine: if there are no side-effects, the chances are that it doesn't work. [More, also the xkcd graphic above is brilliant]

Plus I always like to consider the alternatives we have for electricity, which could be THE energy source of the future if solar, wind, and the Volt come up to speed.

When it comes to safety, there is no game at all. 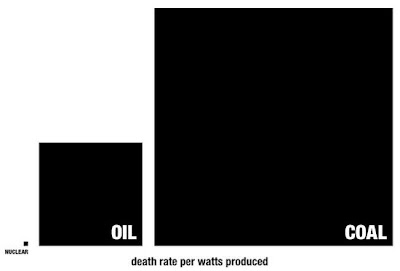 Finally, for all the contempt we have for Big Oil, it isn't much better dealing with Big Coal.

Ask rural West Virginia.
Posted by John Phipps at 6:20 AM

Well, five people had died from radiation poisoning as of Sunday. If more have died, the Japanese press is keeping is mum. they like the US press understand the importance of maintaining a proper political position.

It doesn't matter much if there were many more deaths there, it would not be politically significant. The politicians in Japan are capitalists. They'll do what is right for the economy of Japan.

We have aging power plants in the USA of exactly the same design as the crappy old plant with inadequate safety features in Japan. But unlike Japan, ours are not located in the Ring of Fire.

But what we should take heart in, is that even if a Fukushima type of event, or even several were to occur in the USA, it would not have a political impact in the USA. Thankfully, we have a political system based on capitalism, and not on the mood and will of citizenry.

The future of nuclear energy in the USA is safe and bright.

This is really a good stuff, This sounds good. I like it. Photo Recovery

and your suggestion for what energy source is better than nuclear would be????

regardless of whether the evil government is out to carelessly irradiate the citizenry, nuclear still seems safer and less environmentally damaging than the other options on the table, at least to me.

There's a lot of money in it. No one is going to stop the expansion.

You misunderstand. Safety is not important. Money is. Money makes the world go round. You don't matter, you're family doesn't matter, and I don't matter. We have no value. Your family and my family could die in a nuclear accident and the industry would go on like nothing happened.

What is important is, can someone make money from nukes. And the answer is a resounding yes.

And will there be more accidents? Of course there will. Humans make mistakes. These plants are too expensive to decommission, so they'll regrade until and accident occurs. To make money, corners will be cut, increasing the odds that there will be another accident, any given year.

The people who will make the decisions don't care about you and me. So our personal opinions don't matter. What matters, is maximizing profits. Nothing else is important.

Anonymous, take a look at this article. If you doubt my argument that we're all expendable. Even Goldman Sachs employees are expendable.

At least four Goldman Sachs executives flew into Japan last week to speak with nervous ex-pat employees about radiation fears, according to a person familiar with the situation. They also conveyed another message: don't leave Japan and don't leave Tokyo.

It seems you are avoiding the question. We get that you think all major decisions are driven by economics - that's fine. But I didn't ask what the powers that be thought - I asked what you thought. Do you think that nuclear is a safe option, relative to the other sources out there (use whatever criteria you wish)?

Anonymous, it costs the taxpayer $billions to decommission a nuke.

We have more than 400 nukes and many of them will need to be decommissioned over the next twenty years. Costs could go into the $trillions.

Congress will have a tough time appropriating funds for this, while their benefactors bribe them to put the taxpayer's money elsewhere.

If they are not decommissioned, we'll have meltdowns. We are rolling the dice every year and playing the odds. The odds of a meltdown will continue to increase year after year as the plants age and wear out.

Consider the lottery. The odds of one ticket winning are laughably remote. But with many tickets sold, and the lottery rolling over, week after week, the odds there will be a winner, is 100%.

We're going to keep cutting corners until there is a disaster in the USA. then we'll take safety a little more seriously for 25 years or so.

This goes back the the money question. the money is all that matters. Maximizing profits, while minimizing costs and going cheap on everything will continue to be the rule as the economy declines.

Further, higher oil, natural gas and coal prices will drive up the costs of maintenance. Making them much more expensive to operate. Wages will be cut for staff, and getting well educated workers will be tougher.

I expect we'll have more than one disastrous meltdown in the USA. Is that a good trade off for the benefits? I don't think so. But quite a few people might, if it doesn't happen near them.