Though we have trouble seeing it, the recession in the US appears more manageable or at least, less severe than in many other countries. 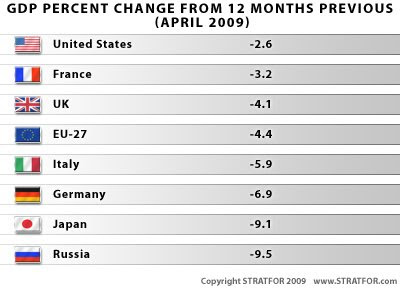 And the primary reason suggested by Stratfor Global Intelligence verifies an intuition I struggled to find logic to prove.  We are at the heart a national economy based on the land we occupy.


The most important aspect of the United States is not simply its sheer size, but the size of its usable land. Russia and China may both be similar-sized in absolute terms, but the vast majority of Russian and Chinese land is useless for agriculture, habitation or development. In contrast, courtesy of the Midwest, the United States boasts the world’s largest contiguous mass of arable land — and that mass does not include the hardly inconsequential chunks of usable territory on both the West and East coasts.
Second is the American maritime transport system. The Mississippi River, linked as it is to the Red, Missouri, Ohio and Tennessee rivers, comprises the largest interconnected network of navigable rivers in the world. In the San Francisco Bay, Chesapeake Bay and Long Island Sound/New York Bay, the United States has three of the world’s largest and best natural harbors. The series of barrier islands a few miles off the shores of Texas and the East Coast form a water-based highway — an Intracoastal Waterway — that shields American coastal shipping from all but the worst that the elements can throw at ships and ports.

(click image to enlarge)
The real beauty is that the two overlap with near perfect symmetry. The Intracoastal Waterway and most of the bays link up with agricultural regions and their own local river systems (such as the series of rivers that descend from the Appalachians to the East Coast), while the Greater Mississippi river network is the circulatory system of the Midwest. Even without the addition of canals, it is possible for ships to reach nearly any part of the Midwest from nearly any part of the Gulf or East coasts. The result is not just a massive ability to grow a massive amount of crops — and not just the ability to easily and cheaply move the crops to local, regional and global markets — but also the ability to use that same transport network for any other economic purpose without having to worry about food supplies.
The implications of such a confluence are deep and sustained. Where most countries need to scrape together capital to build roads and rail to establish the very foundation of an economy — transport capability — geography granted the United States a near-perfect system at no cost. That frees up U.S. capital for other pursuits and almost condemns the United States to be capital-rich. Any additional infrastructure the United States constructs is icing on the cake. (The cake itself is free — and, incidentally, the United States had so much free capital that it was able to go on to build one of the best road-and-rail networks anyway, resulting in even greater economic advantages over competitors.) [More]

This idea should give farmers pause. We are one of the major anchors tying our nation to the physical space we inhabit.  Ergo, we are the link that makes this national asset productive, along with others like transportation and extraction workers, of course.

Moreover, many farmers (as opposed to livestock producers) have been sheltered from the worst effects of the recession by government actions. I find it hard to swallow, therefore, that we continue to seek "victimhood" status and qualifiy for yet more public aid.

Instead, we could be a voice of reassurance "speaking comfortably" to fellow Americans about the solid state of the bedrock of our economy.  We could be acting the role of a reliable, responsible industry that can carry the nation on our shoulders through a difficult time.

While this sounds grandiose, it lifts our own spirits and gives more purpose to our lives than counting our relatively minor problems, I think.
Posted by John Phipps at 5:44 AM

Good points. Unfortunately ag has played victim for so long, it has become a reflex reaction. It is hard to break old habits. My bet is we will continue to hear calls for more government aid to help ag as well as continued criticism of taxes and government spending. Ag has always been pretty blind to its own hypocrisy.