It seems clear to me the battle by the pork industry to rename swine flu H1N1 was about five years too late, and has now been lost.  We're now on to another label, "A(H1N1)S-OIV" as the virus evolves.


While that’s all very exciting, the paper itself is an anxiety-triggering read. The new swine flu (which the authors now call S-IOV S-OIV) is only distantly related to other known swine flus, which means that there are a lot of flu viruses circulating around about which we know very little. And, as I mentioned in my article, it had already entered the human population several months before it came to light earlier this spring. Be sure to check out figure 1 (I’m inserting it below from the wiki–thanks, Creative Commons!), which shows how lots of bird, swine, and human season flu viruses mixed together to produce the new beast. The authors warn that the pattern of evolution they see is the sort of pattern the big flu pandemics followed when they emerged in the past. 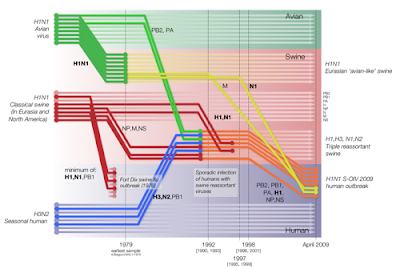 This organism is a true hybrid, and trying to follow the diagram should explain why it will be called swine flu here on out. The situation is serious enough people are talking, and people like memorable, short names for stuff they fear.

Also, in fairness, pigs are a big part of the story.

We show that it was derived from several viruses circulating in swine, and that the initial transmission to humans occurred several months before recognition of the outbreak. A phylogenetic estimate of the gaps in genetic surveillance indicates a long period of unsampled ancestry before the S-OIV outbreak, suggesting that the reassortment of swine lineages may have occurred years before human emergence, and that the multiple genetic ancestry of S-OIV is not indicative of an artificial origin. Furthermore, the unsampled history of the epidemic means that the nature and location of the genetically closest swine viruses reveal little about the immediate origin of the epidemic, despite the fact that we included a panel of closely related and previously unpublished swine influenza isolates. Our results highlight the need for systematic surveillance of influenza in swine, and provide evidence that the mixing of new genetic elements in swine can result in the emergence of viruses with pandemic potential in humans2. [More]

As the declaration of a pandemic is now official, maybe fussing over the media name should take a back seat to educating about the connection being from origins, not contagion.

My guess is the travel/hospitality industry has now moved to the front-lines of the damage from this health threat.
Posted by John Phipps at 6:36 PM

h1n1 influenza A even in pigs is not transferable to the meat or blood and even an infected animal poses NO health risk...re: ontario Pork website testing shows that it stays in the lungs and never enters blood stream or muscle....feel for Alberta producer who had his herd infected by a contractor who had vacationed in mexico and returned before the "alarms" and did work in his barn...he has now by his choice has culled his whole herd (humanely) ....can't imagine what it is like too have to do that both finacially and mentally,,and you still have too pay your bills with 0 income...hope somebody helps him out---regards-kevin