Are we socialist yet?...

Much as I have found when discussing the best role for government during this recession, cries of "socialist" immediately clog the communications channels.  I was relieved to find I was not alone in puzzling what this charge meant. 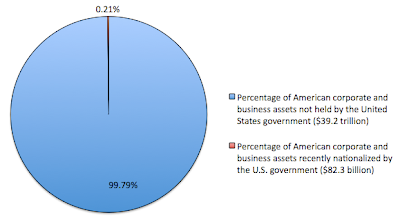 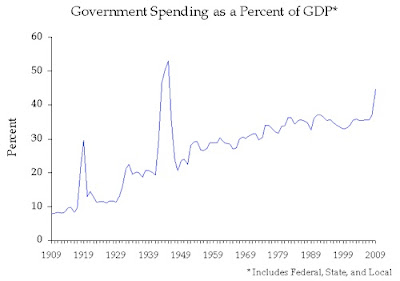 The hot-pink portion of this pie chart is the percentage of listed American business assets that have recently been nationalized by the American government (ie, General Motors). Obama's version of socialism is so sneaky you can hardly see it!

(And there is some reason to think this actually overstates the portion of the corporate landscape that's been nationalized, but more on that at the end of the post.*)

There is a serious discussion to be had here, and I think Jon Henke is having it: Socialism, like farenheit, comes in degrees. Sure, a government that nationalizes GM is "more socialist" than one that does not, even if it doesn't mean we're living "under socialism." But differences of degree shouldn't obscure differences of kind, and as Tim Fernholz says, "it's clear that putting the government in charge of private production is not the Obama administration's guiding philosophy."

If it were, 99.79% of the American corporate assets that existed at the start of the Obama administration would not remain in private hands. The differences of degree are so small that they aren't worth mentioning. And yet, somehow, they keep getting mentioned. [More]

Anyhoo, as I have become convinced, critics who automatically blurt "socialist" to answer any policy question seem to be remarkably deficit when asked for an alternative.  Not always, but often.

With apologies to JFK, we're all socialists now.  At least in some eyes.

And certainly fans of current farm policy.
Posted by John Phipps at 7:06 PM

You need to read more. Bury your heads and when you pull it out, there we'll be. Socialism/Communism is more than that cookie cutter nationalization chart the DNC or maybe it was the Socialist party put out. "Oh, I only have 2% of cancer in my body."

Barry O is a much smarter man than I thought. He has hypnotized the masses.
http://animal-farm.us/change/we-are-all-socialists-now-part-ii-454

The pie chart really doesn't tell us anything other than another X% of our economy has been taken over by Uncle Sam. On top of everything else he already controls. And it doesn't bother you that over 40% of our country's GDP is destined to go through some sort of government agency every year? Makes me sick. And I suspect the B.O. reign will cause a spike just like the one shown during the FDR administration.