Even if you think global warming is hogwash, this might be a good time to clean the pig.  Big $$ are being bet on the possibility of drilling for oil under the former ice-cap as it simply melts away.

In fact, lines in the sea are already being drawn to see who can create the most outlandish undersea geological argument for territorial claims.  Note some the of the big players are the descendants of the Vikings. 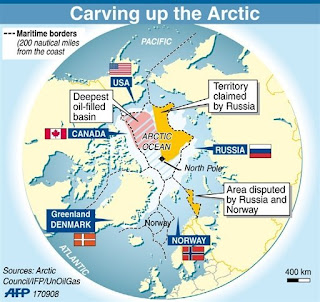 More surprisingly the estimate of reserves is climbing.

A team of scientists at the USGS collaborated with international researchers to conduct the first-ever comprehensive assessment of undiscovered oil and gas reserves within the Arctic Circle.
"We tried to put some boundaries on the range of possibilities and resources available in the Arctic," said geologist Donald Gautier, lead author of the survey, which is published this week in the journal Science.

Using geological analysis and probability modeling, researchers mapped out sedimentary rock deposits to estimate the amount of undiscovered oil and gas beneath undersea continental shelves. This survey, the first of its kind, could help oil and gas companies locate new troves of fossil fuels. [More]

But it is the map showing a real honest-to-goodness Northwest Passage that intrigues me.  What will this route mean to global shipping?  What will to mean to Canada?  Above all, could we realign grain shipping patterns in unexpected ways?


As environmentalists and scientists debate the effects of global warming and sea ice melting in the Arctic, shipping experts are quietly weighing how quickly — and how dramatically — international commerce might see a silver lining.
The Arctic has become a lighting rod of debate as Arctic nations, including Russia, Denmark, Canada and the Untied States, jockey to take advantage of highly lucrative natural resources beneath the fast-melting ice. About 90 billion gallons of oil and 1,670 trillion cubic feet of natural gas are buried underneath ice north of the Arctic Circle, according to the U.S. Geological Survey.
But melting sea ice would open new, previously treacherous and non-navigable passageways over Asia and North America, shortening some routes by thousands of miles. For example, access to the currently blocked Northwest Passage over North America would reduce a trip from Yokohama, Japan, to Rotterdam in the Netherlands to just 5,618 miles, according to Scott Borgerson, an ocean governance expert at the Council on Foreign Relations, a New York-based think tank.
That's a far cry from the popular 11,209-mile trip that requires ships to pass through the Panama Canal.

"It's not a matter of if but when," Borgerson said last week. "It's going to be sooner than later." [More]

Since the ice disappearance has overtaken all estimates to date, "sooner" may be much sooner. Throw in oil money to spur the development of special ships and equipment for navigating the Arctic, million of acres with more degree-days from climate change, and suddenly Canada is building a railroad north to load wheat, corn, oats, canola, bananas*, etc.


*Checking to see if you're paying attention.
Posted by John Phipps at 3:07 PM

And the greens say global warming is bad! Think of all the oil saved by cutting voyages in half.

Canada does have a grain port at Churchill , manitoba...but is-was seldom used as season was so short too ship in or out before freeze-up..its just sitting there being watched by polar bears so maybe it will re-gain value as it is relatively new and modern...and on a side note,,instead of less polar bears as some would say,in reality there is more than 20 yeqarsago-regards-kevin