Maybe it's not working...

As push comes to pushback on the health care reform effort, one popular response (ostensibly from those with jobs and good insurance, for the time being) is our system is working fine, thank you very much.  Maybe.

Perhaps if they check the windshield, they would notice a road hazard ahead.  Behold the portion of our national output (GDP) consumed by health care, as projected by the CBO. 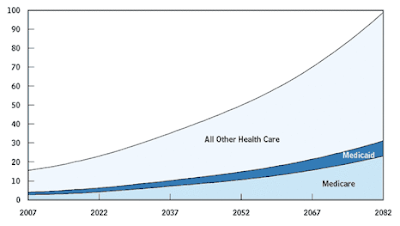 We may in fact be running ahead on these curves, as our GDP falters and health expenses don't. Regardless, health insurance costs increases will soon show up in even complacent consumer budgets.

Despite the slower 9 percent growth in medical costs projected for 2010—the growth rate was 9.9 percent in 2008—the increased cost-sharing could squeeze workers, the report says. In the last five years, health insurance premiums increased four times faster than wages—and the consultancy expects that trend to continue in 2009 and 2010. Some 6 million workers—an unprecedented number—were in high-deductible health plans in 2008, up from 1 million in 2005, according to America’s Health Insurance Plans.
Although the report says that health reform could eventually slow the growth of medical costs, these costs will continue to increase. Citing the Centers for Medicare & Medicaid Services, the report says the health industry is expected to represent 18 percent of the U.S. economy by 2010. [More]


It's hard for me to see anything to conteract this trend either.  Health care doesn't fit with capitalist economics or popular ideas about moral response to sickness.

In a capitalist economy, the thing that is supposed to keep prices in check is the buyers. If someone offers me a product that costs more than it is worth to me, then I won’t buy it. But we can’t count on patients to play this role in health care, because there is no way to make patients internalize all of the costs of their care; they simply don’t have the money. Furthermore, most people don’t understand the health production function (the relationship between treatments and outcomes), so they don’t have the ability to select treatments that provide benefits that are worth their costs. (And, in many cases, it’s not obvious even to professionals that a treatment isn’t worth the cost; it’s only obvious when you look at the data in aggregate.)
What about payers (health insurers?) A “market” solution would be to change the reimbursement rates for different procedures – increase payment for things that doctors should do more of and reduce payment for things that doctors should do less of. Theoretically, payers should be doing this already. However, in the current situation, a private payer who tried to reduce the rates for popular, expensive procedures would find itself unable to attract providers. The only payer with any real negotiating power is Medicare. The private payers have little ability to control costs. Or, if they have the ability, they aren’t exercising it.
In short, prices will only go up. As a result, the cost of health insurance goes up, and the market finally kicks in in the crudest possible form: people who can’t afford it become uninsured. At some point, if we have enough uninsured people, the health care industry will hit a point where it cannot increase revenues anymore, because it has fewer and fewer paying customers. [More]

Are we at the point where enough of us a) are affected adversely by the current system or b) believe we will be soon?

I'm not sure.  But recent polling provided some surprising support for an alternative to the present system.


The poll found that most Americans would be willing to pay higher taxes so everyone could have health insurance and that they said the government could do a better job of holding down health-care costs than the private sector. [More unexpected results]

The public option is becoming the focal point of contention.  It could well be that fears of government control will overcome the urgency for addressing this issue again.

But oddly, nobody is proposing doing away with truly government run health insurance: Medicare.  In fact, it is now a familiar, announced "joy" in our church for 65-five-year-olds to be thankful for the happiness of that birthday and qualifying for Medicare.

Maybe guaranteed health care is a well-deserved reward for years of breathing.  But then we should not be taken aback at how much we spend on health care in the last years of life.

As the prognosis fluctuates on the end of the recession, where we are in our outlook could make the future of health care more ominous.  Hence my suspicion the recent revival of of recession fears (or its length) could actually nudge the outcome of this debate in favor of more vigorous reform.
Posted by John Phipps at 7:11 AM

I've grown very weary of everyone complaining about how quickly the cost of health insurance increases. It's all about the amount of health care we consume which grows exponentially. If we buy more and more, duh, the price will go up. Since the consumer has very little connection to what it costs, we will continue to consume more.