Where deficits come from...


The first is that President Obama’s agenda, ambitious as it may be, is responsible for only a sliver of the deficits, despite what many of his Republican critics are saying. The second is that Mr. Obama does not have a realistic plan for eliminating the deficit, despite what his advisers have suggested.

The New York Times analyzed Congressional Budget Office reports going back almost a decade, with the aim of understanding how the federal government came to be far deeper in debt than it has been since the years just after World War II. This debt will constrain the country’s choices for years and could end up doing serious economic damage if foreign lenders become unwilling to finance it. [More]

To help visualize this accounting:

[Click to enlarge][More]
A chart I found even more helpful: 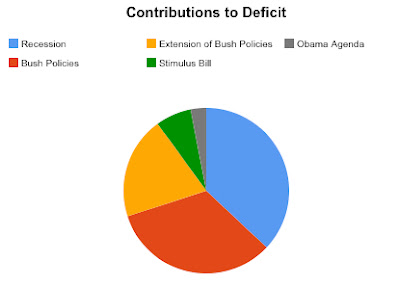 Once we get past the finger-pointing, and actually look at which holes the money is draining down, I wonder how our appetite for wars in Iraq and Afghanistan will hold up.  To date I have seen no resolve from any quarter (other than a few voices like Rep. Jeff Flake) to even strike a glancing blow at spending reduction, and agriculture is a poster child.  Any hint of  cutting any ag check rouses the ag lobby to full alert.

Ditto the legions of lobbyists for other constituencies.  Hence, we may back into the non-choice of allowing our credit to debase and witness very serious inflation.  It's how investors show their displeasure with fiscal imprudence.

In other words, unless we can contain defense and health spending, we will see some appalling interest rates. I always think these things will happen sooner than they do, so my best guess is to brace for at rates in the 'teens by 2011.
Posted by John Phipps at 10:27 AM

This information says it all. It may be hard for many to swallow but numbers tell the story. Thanks for showing it.

Categorizing the Afghanistan and Iraq wars as 'Bush policies' is overly simplistic and misleading. There were (and are) plenty of others advocating similar courses of action. They were not all simply 'yes men' either. Are we to believe if Bush had never been POTUS, neither war would have happened?
Blaming one individual for over 1/2 of the deficit does provide a nice scapegoat to make the some feel better. Its always someone else's fault.

I sure can't imagine a more objective source of info than the NYT.

The chart shows when the ongoing commitment to expenditure began. You may label that as blame, but it is undeniable that the wars and especially part D were enormous deficit sources that were passed down the line.

Would we be in Iraq? I seriously doubt it, as the administration we now know pushed with false reasons and overly optimistic expectations for the conflict. Afghanistan, maybe.

Regardless, when you have the watch, you own the results. For example, the previous administration takes credit for no terrorist attacks (after 9/11). Despite many other supporters for the policies only the President is the "Decider", as we were repeatedly told.

The point for me it the staggering deficits would still be huge without a recession and stimulus package and new programs.

Please run through the CBO report upon which the charts were based. If you have numbers that show these budget commitments are not correct, I will post them also, but my reading shows this to be pretty accurate and in concert with economists on the right and left.

If this was an op-ed I would consider the source, but this was hard news and even the commenters in the NYT had trouble pointing our numerical problems.

If your issue is with the CBO, I will be posting about the new blog by the director that may shed some light.

Thank you for yet another news piece I would not be aware of w/out your work. Do you really think interest rates could be in the teens in less than 2 years? It would be a long time a coming for the savers out there who deserve some higher rates but I'm afraid a much bigger shock than $4 gas was to every one else.