But do they have dilithium crystals?... 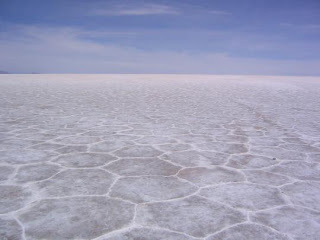 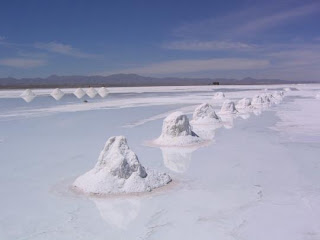 This place is immense.  It is over twelve thousand square kilometers in area, which makes it the largest salt flat in the world.  To give an idea, that is over twenty five times larger than the more famous Bonneville Salt Flats in the United State.  It also has the distinction of being the highest salt flats in the world at three thousand seven hundred meters above sea level.  The mounds in this first picture are not, as you may first suspect, a naturally occurring phenomena.  The hand of man is at work here.
...


Coincidentally the major minerals to be found in salt are halite and gypsum.  One use of halite is to keep ice off our pathways and roads while gypsum is used as a finish for walls and ceilings - you probably know it as drywall

.  There are also considerable stocks of lithium in the salar, which are used in the production of batteries and certain pharmaceuticals.  However, Bolivia as a nation exports none at the moment.  It does not want large multinationals muscling in and is preparing to develop its own strategies to ‘mine’ the lithium.

And with plug-in cars gaining traction (heh), the need for lithium in batteries could be significant.


Like other batteries, those that use lithium work by shuttling ions (electrically charged atoms or groups of atoms) between their electrodes. When they’re charging, the ions travel in one direction. When they’re discharging, they go in the other. The most widely used have a positive electrode made from cobalt or manganese oxide and a negative electrode made from graphite. The electrolyte (the material through which the ions pass from one electrode to the other) is a lithium-based gel or polymer. These types of batteries are mainly used in laptops, and are not well-suited for the automotive environment, where they’re subject to rapid discharging and recharging, much higher power demands and extremes of heat and cold. The problem is that the chemistry isn’t stable enough, so batteries suffer from overheating—and that can have an explosive effect.

The most promising electrode chemical makeups, then, involve nano-engineered materials like phosphates of iron, lithium-titanate spinel and, most recently, bundles of silicon nanowires. Making an electrode out of these tiny particles increases the available surface area for the ions to bond to and exchange electrons, avoiding a bottleneck that used to result in deformation (and diminished effectiveness) of traditional materials like graphite. The smoother-flowing electrode decreases the battery’s internal resistance and improves its ability to store and deliver energy.  [More]

The search for energy will take us to strange places.  This could be one of them.