The flaw of averages*...

The recent release of net farm income projections for 2009 have provided ample ammo for those who are anxious to reclaim a cushy position for agriculture in the Victim Line.  After all, NFI is expected to drop 38% - a pretty drastic plunge.

[How many knew the difference between NFI and NCI?  Anyone? Bueller?]

On a graph, however it looks less apocalyptic. 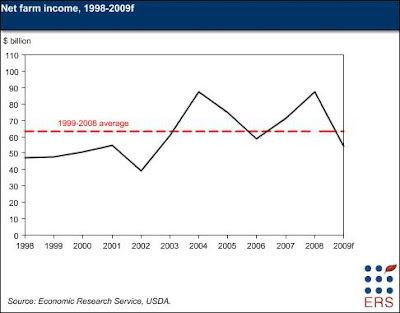 This is remarkably benign compared to other sector income performances during this recession.  At most it illustrates what a windfall 2008 was.

The big prob here is all farmers are piled into one bucket for measuring.  While grain guys like me are not happy with our outlook, we're sitting pretty compared to livestock and dairy.  Not all farmers need or deserve public sympathy or extra support.  Certainly not sugar.

However, our system will likely allocate at least some handouts to those same guys.

There are some folks in trouble on the farm, but the average is masking the reality.

* I'm reading an eponymous book and will report on same anon.
Posted by John Phipps at 7:54 AM