I appreciated the presentation by Dr. Gene Takle I had the chance to see when I was in Iowa last week.  I have excerpted his conclusions/predictions for Midwest agriculture below.  They prompted some pondering on my part. 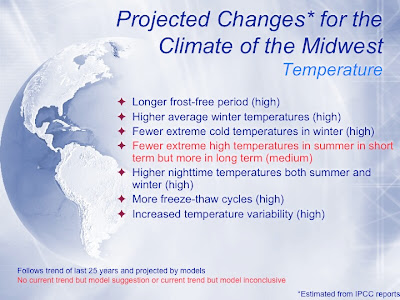 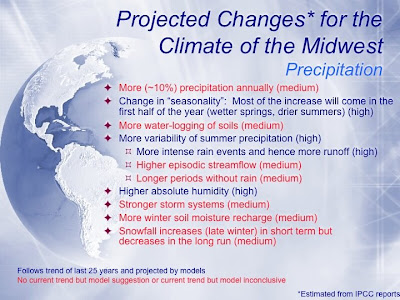 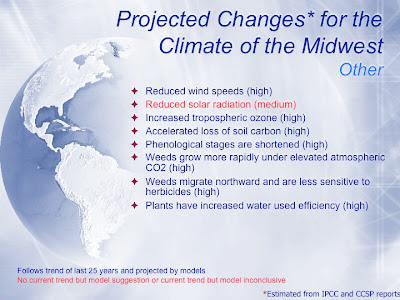 Most of all I admired his matter-of-fact scientific integrity and openness in the face of an overwhelmingly skeptical audience.  Iowa State is hardly a hot-bed of politically driven pseudo-science, and Dr. Takle certainly comes across as a dedicated climatologist.
Still, the room of farmers were largely unconvinced, I think.  Which, since one of the touted claims for ethanol (The Official Iowa State Chemical) is lower carbon emissions, is curious.  You'd think the link between reasons to subsidize/mandate ethanol and advancing climate change response would be pretty clear by now.
Anyway, my take-away (that's two, and counting) from this was 1) rethinking my skepticism on crop insurance since storms could adopt more extreme patterns, and 2) keep putting in tile/waterways as large rain events could be more common.

If I think of others, such as what this means for standby generation, roads, construction changes, etc. I'll let you know.
Posted by John Phipps at 6:44 AM

Is the entire presentation available online?

John, I have been a fan but your constant drum beat on this has grown old. Your comments suggest a smarter than the rest of us attitude as well. Why do you assume the prof. is 100% correct and the "skeptical audience" are a bunch of dummies?

To anonymous #2,
You have got it right. My experiences with Mr. Phipps has always made me feel that he is a little more intelligent than the rest of us. He is always more than excited to tell us that he is not just a farmer, but an ENGINEER! The so called experts on climate change have that same attitude to the rest of us.

...here's the link to Dr. Takle's website- http://www.meteor.iastate.edu/faculty/takle/
I still don't buy the experts way of thinkin...you can't pay a company OR legislate it away.
I still like ya Mr. John, even if we do butt heads from time to time.

The file was too big for my first idea, but I'm working on it. It's not on his webpage either.

Your comments are welcome, and remind me why the blog is named "Incoming".

I regret that my personality has apparently displaced my arguments.

Dr. Takle may not be "right". But as he said, his job is to communicate the best science available. I think he does that well, and agree with his logic.

On the right side of the link I posted is his presentations,research and other things. One thing he stated in the Power Point presentation, that you posted, struck me as funny.m Dr. Takle said that his findings when not noted were the conclusions from his peers?. Gotta wonder if they were all just guessing on the outcome.

John, keep on writing. Its your blog, you make sense on a lot of issues and I hope you keep banging on that drum. A Grateful Reader