I thought I heard a crash... 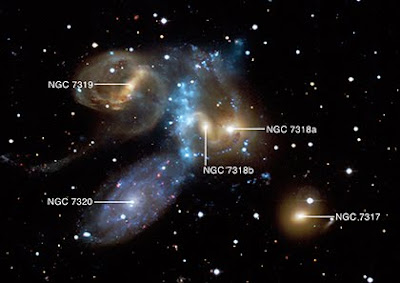 This beautiful image gives a new look at Stephan's Quintet, a compact group of galaxies discovered about 130 years ago and located about 280 million light years from Earth. The curved, light blue ridge running down the center of the image shows X-ray data from the Chandra X-ray Observatory. Four of the galaxies in the group are visible in the optical image (yellow, red, white and blue) from the Canada-France-Hawaii Telescope. ... The galaxy NGC 7318b is passing through the core of galaxies at almost 2 million miles per hour, and is thought to be causing the ridge of X-ray emission by generating a shock wave that heats the gas. [More]

If it wasn't so cold, I'd do some summer stargazing.


BTW - Carl Sagan never actually said, "billions and billions", in case that phrase just came to mind.
Posted by John Phipps at 11:57 AM