Which one is different?...

Pop quiz - which of these price curves is not like the others? 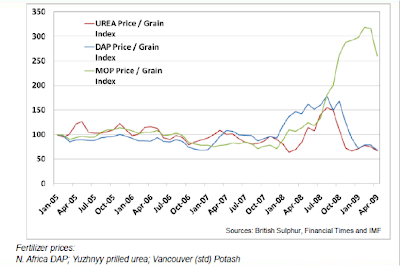 This chart is from the brilliant presentation* by John Malinowski, Simplot Agribusiness on July 15 in Canada. (When we weren't enjoying the single-payer health system, we really got some great information!)
It compares fertilizer prices against a "basket" of commodity prices.   The "100" line is the ratio of commodity prices at that time to N-P-K prices.  Basically, it suggests N and P are relative bargains right now, but K....
My take-away (and you have to use that term several times in the biz now) was the potash boys are fooling themselves if they think they can defy economic gravity or force their customer/horses to drink.
What I heard from John was Canadian potash producers are betting the mine on India.  Meanwhile, the stuff is piling up unsold.

With natural gas prices floundering and massive phosphate production capacity about to come online, potash producers have picked an odd time to try to swim against the tide.
From my vantage point, buying over-priced potash makes no sense, as we really don't know (IMHO) whether we are using the reserves in our soil as well as we could be.  I stopped applying K last year, and if my soil tests decline as slowly as massive applications made them rise, I can wait the potash industry out, I think.

* E-mail me for the whole PowerPoint presentation.
Posted by John Phipps at 5:05 PM

Email ThisBlogThis!Share to TwitterShare to FacebookShare to Pinterest
Labels: fertilizer

With you on that. But our actual results have been different - whether due to the repeatability of the test or other vagaries of measurement.

More perplexing is land we have just rented which hadn't seen a P or K application is years. The tests were not that bad.

Well, I do hope things would turn out to be better for everyone's sake.

Signature: Telling stories with right storyboarding presentation together with PowerPoint presentation is like owning a printing press and printing your own currency.