All burgers are not equal...

Some people take hamburgers very seriously.  In fact, it's a little unnerving. 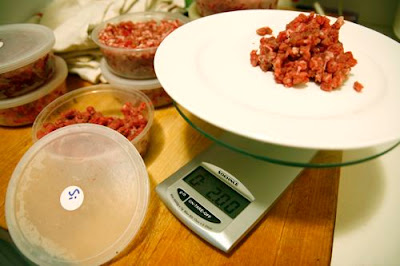 To this end, I decided to do a tasting of "single-malt burgers, carefully noting what distinguishes each cut from the rest, as well as cataloguing all the flavors that come under the umbrella term "beefy," in the hopes of coming up with the ultimate blend. The Blue Label Burger, if you will. I pulled out my boning knife and meat grinder, and headed to the butcher, determined to master the art of burger blending.


In choosing cuts of beef that could go into the burger, I first made a broad decision: This was to be an everyman's burger. Fancy-pants burgers exist, but they are contrary to the spirit of the sandwich. There would be no dry-aged cuts, no special breed cows, and nothing that is more suited for a steakhouse in my blend. Burgers, like good charcuterie, are about taking the cheap and ordinary, and converting it into the sublime. For this reason, I set an upper limit of $8 a pound for the cuts in my mix, which narrowed down my options to eight cuts: sirloin, chuck, short rib, skirt steak, hanger steak, flap meat, brisket, and a surprise entry—oxtail. [More]

Of course, at the other end of the spectrum is the grisly tale of how other burgers are blended that has been much in the news.


The frozen hamburgers that the Smiths ate, which were made by the food giant Cargill, were labeled “American Chef’s Selection Angus Beef Patties.” Yet confidential grinding logs and other Cargill records show that the hamburgers were made from a mix of slaughterhouse trimmings and a mash-like product derived from scraps that were ground together at a plant in Wisconsin. The ingredients came from slaughterhouses in Nebraska, Texas and Uruguay, and from a South Dakota company that processes fatty trimmings and treats them with ammonia to kill bacteria.


Using a combination of sources — a practice followed by most large producers of fresh and packaged hamburger — allowed Cargill to spend about 25 percent less than it would have for cuts of whole meat. [More]

My reaction to this sad episode is 1) don't buy hamburger, buy ground beef and 2) eat your burgers well-done.  I am not giving Cargill a pass - and I doubt litigators will either - but right now hamburger is a riskier food than other cuts of beef for the obvious reasons above.

Regardless, it is the extremities of the curve to lower food costs for consumers that is widely hailed as the answer to income inequality by making it cheaper for the poor to live better than they used to on low wages.  I suppose this works out in the equations, but maybe they are not pricing in the externalities and increased risks.


A number of other recent studies indicate that measured income inequality has been overstated due to inadequacies in traditional methods for constructing price indices and estimating real income. For example, in the latest iteration of a much-discussed paper Christian Broda and John Romalis find that


the relative prices of low-quality products that are consumed disproportionately by low-income consumers have been falling over this period. This fact implies that measured against the prices of products that poorer consumers actually buy, their “real” incomes have been rising steadily. As a consequence, we find that around half of the increase in conventional inequality measures during 1994 - 2005 is the result  of using the same price index for non-durable goods across different income groups.


Many popular narratives about inequality are grounded on the alleged fact that wages and incomes at the middle and bottom of the distribution have been stagnant for decades. It appears that this, too, may be an artifact of insufficiently sophisticated methods for constructing the price indices used to calculate rates of inflation. Using an updated price index, Christian Broda, Ephraim Leibtag, and David Weinstein [pdf] find that


the real wages at the 10th percentile increased by 30 percent from 1979 to 2005. In other words, the real wages of low earners have not remained stagnant, as suggested by conventional measures, but actually have been rising on average by around 1 percent per year.


No doubt  there are sensible methodological objections to all these studies. But taken together they are impressive. Suppose we accept their upshot. Suppose economic inequality has actually increased very little lately. Suppose that the American lower and middle classes have over the last few decades enjoyed gains from economic growth equal to those enjoyed by the bulk of the upper class. Would you conclude that Krugman raised a false alarm? I hope you would. Would you say the United States’ socioeconomic system is really pretty fair after all? Would it change your opinions about what does or does not need to be done? [More]

I find the downplaying of increasing income inequality on the basis that the cost of being rich is going up faster than the cost of being poor to be near nonsense.  And I'm not alone.  Others have pointed out other hard-to-measure economic assets that add to the growing concentration of wealth and income into fewer hands.


What good is money for? Well, in a liberal society, it’s good for two things: more things and more autonomy. The things part is down – as Will is quick to point, goods at the lower end of the consumption scale are cheaper and better working over the past few decades. So even if many consumers have not seen their incomes rise, they feel richer since the goods they are getting are cheaper. True dat!
What I’m more interested in is the autonomy end of it. What about the ability to leave an abusive partner or job without worrying about health care? Travel, spend more time with your family, feel a sense of financial security, etc? Here people less worried about income inequality would say that consumers are in better position to take advantage of this as well since they are richer.


So what they have a cheaper basket of certain goods. Now though autonomy isn’t commodified and sold on a market, the items that we associate with it, insurance, education, perhaps housing, have all seen skyrocketing prices, an effect that blocks out the first effect. This leaves consumers noticeably poorer than they would be otherwise. You’d need to construct a separate index and see the effects played out; I hope researchers are able to do that. [More]

Unlike previous economic slowdowns this one may actually increase income inequality instead of hitting the top earners harder by dropping asset values like stocks. As we have seen, those hundred-million dollar jobs are still out there, but the $50-60K ones are still lagging badly.  Ancedotal information, to be sure.  But we should have income quintiles soon to substantiate this growing and, I think harmful divide.
Posted by John Phipps at 6:20 AM

Let me get this straight! Poor people are richer because the cheap goods they can afford have not risen in price as much as the cost of goods that richer people buy, is that right? Well, that sure is good news! It kinda makes one feel sorry for those who have too much disposable income doesn't it?

I believe my Daddy said figures don't lie, but liars can figure. Statistics are sort of like reading the Bible, they can be used to 'prove' about anything...as long as some of the figures are not figured in!

So...are you conceding the ugly truth: Oprah was right. Hard to blame her for not wanting to eat hamburger.

Hamburger is the bologna of beef. Meat packing houses often 'inject" different cuts of meat and carcasses. Sometimes it's labeled a marinade or flavoring or preservative, but the truth is it's mostly water. Local meat departments usually have a contract with a company in-state. It' says a lot when the patty on your whopper or big mac comes from Brazil, Argentina, Australia, etc., etc..