The miracle of makeup...

And other facial illusions, and the consequences. 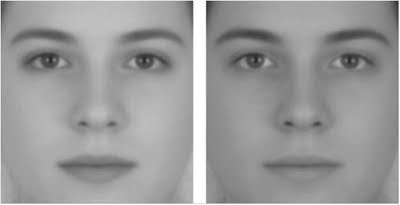 The Illusion of Sex, by Harvard psychologist Richard Russell, won Third Prize at the 2009 Best Visual Illusion of the Year Contest. The two side-by-side faces are perceived as male (right) and female (left). However, both of them are versions of the same androgynous face. The two images are exactly identical, except that the contrast between the eyes and mouth and the rest of the face is higher for the face on the left than for the face on the right. This illusion shows that contrast is an important cue for determining the sex of a face, with low-contrast faces appearing male and high-contrast faces appearing female. And it may also explain why females in many cultures darken their eyes and mouths with make-up. A made-up face looks more feminine than a fresh face. [More]

We are exquisitely equipped to recognize and read faces.  In fact, this is one big way fear is communicated.  This happens extremely rapidly, and is an underlying cause of riots and panics.


The facial expression of fear is often the first sign of the emotion we notice in others.

How would you draw a scared face? Wide eyes, raised eyebrows and a mouth pulled back toward the ears are probably on your list. And for good reason. These are the characteristic features of a “fear face.”

Experts believe we mainly make this face and other emotional expressions to communicate what we’re feeling—sometimes to recruit the help of others, sometimes to warn them of danger.

Some emotions, such as fear, joy, sadness and anger, may be primary, making them easier to read. Others maybe more complex blends of several emotions. For example, experts who study facial expressions consider smugness to be a mix of contempt and enjoyment.


Some scientists believe the emotional faces we make are universal and that we’re born with the capacity to make them. Researchers, such as Dr. Paul Ekman of the University of California, San Francisco, have studied the meaning behind emotional faces in populations around the world. They’ve reported significant similarities across cultures. Still, some experts argue that we learn to make facial expressions by mimicking others. [More]

As more of us, for whatever reason, experience fear and anxiety, we will pass this awful feeling along to those who see us. Maybe we can't help it, but everything we can do to sidetrack our minds with other tasks and relieve the constant expression of fear will help to stabilize our social world.
Posted by John Phipps at 6:32 AM

Email ThisBlogThis!Share to TwitterShare to FacebookShare to Pinterest
Labels: psychology