After reading several great posts from James Fallows about the linkage between weight and socioeconomic class - even if imaginary - I find myself guilty of the same discrimination.


From a friend in Boston, a note that gives an extended version of a theme in many responses I've received. Background here and here. Charts and data on this point shortly. The argument here -- that, along with smoking, obesity has become a class-bound marker and problem in America -- is hardly surprising, but the power of the connection is what many people emphasize. [More]


Color me guilty. I instinctively make inferences about people I merely see by their weight.  I am not bragging here, just trying to be honest. And I don't think I am alone.  We interact with the obese differently.

Moreover, participants expecting to chat to an overweight student reported feeling more socially powerful as revealed by their agreement with statements like "I could make the interaction more enjoyable for my partner" and "I expect that my partner will like me more than I like him". Finally, participants waiting to talk to an overweight partner also tended to rate their partner more negatively, and were more likely to say that obesity is due to lack of willpower.

"Participants' feeling of empowerment when interacting with an obese person may be based on the activation of obese people's status in American society today," the researchers said. "The perception of this lower status may have been used as a 'cue' triggering a perception of empowerment by the perceiver." [More]


Now throw in the fact that we have created the first society on earth where the poor are more likely to be obese, and the circle is complete.  Just as ragged clothes and grooming used to be associated with poverty, everyday experience has ingrained this newer association, I think.


It could be an underlying factor in the battle over health care reform.  Although overweight people have typical health outcomes and incur average expenses, the obese do require greater services and present more health problems.

The burdens caused by the obesity epidemic are unsustainable. Unless we do something now, the cost burden of obesity — currently nearly $150 billion each year — will be an ever-tightening yoke around the neck of future generations of Americans. The emotional burden from stigma bears down on our neighbors and friends every day in the form of an inability to be successful at school, work and in numerous other unseen ways.
In addition to these costs, the actual health burden of obesity is threatening to crush our already tenuous “sick care” system. Obesity accelerates heart disease, type 2 diabetes, some types of cancer, stroke, high blood pressure, breathing issues, sleeping problems and psychological disorders. These are the types of chronic diseases — largely preventable — that cost us 75 cents of every dollar spent on health care today.
Despite the clear harm being done to our nation, current discussions on health system reform are informed more by partisan politics than by evidence and accurate information. Mixing political agendas and public health is counterproductive for the nation and for the individuals who are struggling with weight issues and the associated chronic diseases. Our leaders need to set political aspirations aside and act in the best interest of our nation’s physical, mental, economic and spiritual health. [More]


There are two issues at least occurring here.  We expect the poor to lack basics, such as food. We see pictures of malnourished people constantly in appeals from charities. The concept of a poor, obese person seems intuitively oxymoronic.  Contrast this with the classic Great Depression picture of pinched, underfed faces. 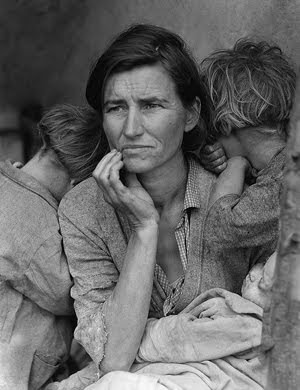 The second undercurrent is the fear that undermines much of American character these days as jobs and futures melt away. The health care opposition is framing the issue as taking from those who have to give to those who have not.  Since we ascribe (perhaps rightly) much of the health issues on the poor/obese, few feel the empathy necessary to make any sacrifice for those with less.

In fact, as Justice Sotomayor discovered, "empathy" is definitely out of fashion right now.

Throw in misconceptions about who the "poor" in America are (of the roughly 36 million in poverty, 24 million are white, for example), and you have powerful emotions propelling the resistance to government aid to the poor.

The obesity complication to poverty will take some time to deal with counterintuitively, I would think. We're only beginning to admit to our own powerful biases against the obese.

And as a member of a profession which is not noted for being slender (count the ratio of farmers you would consider overweight in any current farm magazine), it might behoove us to begin judging the poor with more calibrated eyes as well.

After all, that same prejudice could be in the eyes of those looking at us.
Posted by John Phipps at 4:05 PM