We find our history.

The stunning discovery of "Ardi"was the product of careful work - and a lot of it.  Like, 15 years or so.


At 4.4 million years of age, Ardipithecus ramidus, which scientists have nicknamed Ardi, is now the oldest skeleton of a human ancestor since the discovery of Lucy, the 3.2 million-year-old female hominid skeleton discovered in Ethiopia in 1974.

Until now, Lucy was believed to have shared a common ancestor with prehistoric apes and to have evolved from there.

But scientists say their new analysis of the older Ardipithecus skeleton suggests that chimps and humans evolved separately from an even older common relative. [More]


Most interesting to me was the development of human ancestral bodies to bipedal, upright locomotion. Here is one of the best living science writers, Carl Zimmer:


Ardipithecus’s feet were mosaics too. The four little toes were adapted for walking on the ground. Yet the big toe was still opposable, much like our thumbs. This sort of big toe helped Ardipithecus move through the trees much more adeptly than Lucy.
But Ardipithecus could not climb through trees as well as, say, chimpanzees. Chimpanzees have lots of adaptations in their arms and shoulders to let them hang from branches and climb vertically up trees with incredible speed. Ardipithecus had hands were not stiffened enough to let them move like chimpanzees. Ardipithecus probably moved carefully through the trees, using its hands and feet all at once to grip branches.
Just a Reminder: We Didn’t Evolve From Chimpanzees
Chimpanzees may be our closest living relatives, but that doesn’t mean that our common ancestor with them looked precisely like a chimp. In fact, a lot of what makes a chimpanzee a chimpanzee evolved after our two lineages split roughly 7 million years ago. Ardipithecus offers strong evidence for the newness of chimps.


Only after our ancestors branched off from chimpanzees, Lovejoy and his colleagues argue, did chimpanzee arms evolve the right shape for swinging through trees. Chimpanzee arms are also adapted for knuckle-walking, while Ardipithecus didn’t have the right anatomy to lean comfortably on their hands. Chimpanzees also have peculiar adaptations in their feet that make them particularly adept in trees. For example, they’re missing a bone found in monkeys and humans, which helps to stiffen our feet. The lack of this bone makes chimpanzee feet even more flexible in trees, but it also makes them worse at walking on the ground. Ardipithecus had that same foot bone we have. This pattern suggests that chimpanzees lost the bone after their split with our ancestors, becoming even better at tree-climbing. [More] 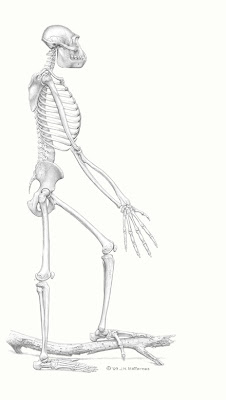 This research was timely for me as I just finished a V-E-R-Y tedious 36 lectures by Brian M. Fagan on Human Prehistory and the First Civilizations.  I have written before about the audio courses that make my weekly commute to South bend to tape USFR marginally productive.  This one was a pain, but did prepare me oddly for the time frames used for early human development.

Good science takes time, and the years invested in this effort will move us slightly closer to understanding who we are and where we came from.
Posted by John Phipps at 6:58 PM