Climate change in the rain gauge...

One of the persistent arguments against global warming from American farmers is the obvious one: it's getting cooler - look at this summer!  This error is hard for us to intuitively absorb because we are trapped in the "here and now".

But was this summer cooler globally?  Nope. 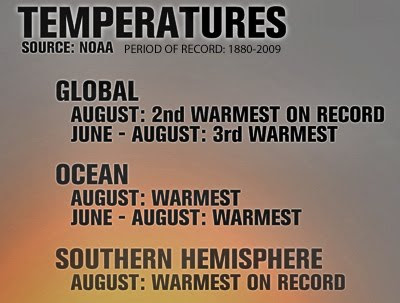 This is essentially the message I heard this summer and found convincing. It also will affect my choices of corn maturity and investment in drainage, drying, and storage more than machinery.

Not all the effects of global warming are hot temperatures. The big one for us, I think, will be rainfall events.

So what does all this mean? Did global warming "cause" the Atlanta flood?

Well, the atmosphere is very complex, and with any weather event there's a combination of factors rather than a single one for an outright cause. Additionally, there's no way of knowing what would have happened without the climate having changed. Maybe there would have been an even more extreme and deadly catastrophe by way of a landfalling major hurricane. And large-scale climate drivers didn't determine the small-scale specifics of, for example, my neighborhood having been spared serious flooding while other Atlanta suburbs got hit hard.

Nevertheless, there's a straightforward connection in the way the changing climate "set the table" for what happened this September in Atlanta and elsewhere. It behooves us to understand not only theoretical expected increases in heavy precipitation (via relatively slow/linear changes in temperatures, evaporation, and atmospheric moisture) but also how changing circulation patterns are already squeezing out that moisture in extreme doses and affecting weather in other ways.

The author above helpfully explains the phenomenon of "cutoff lows" that Mike Hoffman (USFR) has been talking about and the stronger than normal pressure ridges.

As I have said often, I respect the right of farmers to disagree with the idea of global warming, but I also claim the right for my farm to profit from adapting to the change.  There is little money in betting on sure things.


Update:  Here is the video suggested in the comments.  It is similar to Pascal's famous "existence of God argument:

This is reductionist thinking of course, but roughly parallels my position of choosing how I want to be wrong.

oxhttp://www.youtube.com/watch?v=zORv8wwiadQ on the same subject...thought this would give you food for thought. I have no idea what qualifications the speaker has at all. I just found it interesting. Would what he is proposing be betting on a sure thing or against ones-self?

..poor drainage in Atlanta. I used to work all around there. The pucker factor could set off a seismograph when clouds appear. But the drainage problem exist because of over regulation from different departments and environmental as well as preservation groups. Atlanta is a bureaucrats dream town.
The guy on youtube makes a very valid argument for basically flipping a coin a few times. Who knows??

For the last 11 years we have not observed any increase in global temperatures:
http://news.bbc.co.uk/2/hi/science/nature/8299079.stm

Eleven years is like looking at one month on a price chart and calling a long term trend in corn prices.