What's the deal with Argentina?...

Who loves us?  Or who loves the US? 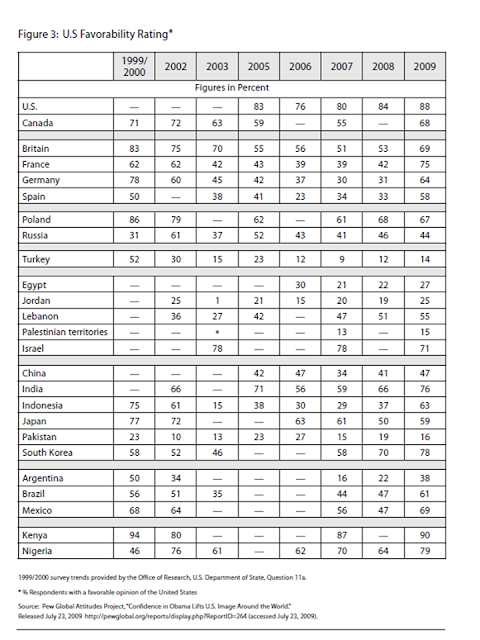 The table above (from PEW and the APSA report I blogged about earlier) shows that there is considerable variation across both time and space in how favorably publics regard the United States. There is much of interest to be explored here, especially for our political behavior audience given that PEW is very generous in making its data available for further analysis.

There is a notable Obama jump, especially in Europe but also in some other countries like Indonesia, Nigeria, and Brazil. It is not clear whether foreign publics like Americans better because they elected Obama or that they like the U.S. better because it now has a president they believe they can work with. It is also not clear what actual cooperation this will buy Obama. A clever political scientist may figure out a way to study that question.

The patterns do suggest that publics are responsive to policy. The Iraq war led to drops in support, especially in the Muslim world. In Russia, the main drop came with the Kosovo war (this is better visible in time trends that go back further). In Asian countries where the US provides strong public goods, support is pretty high. In countries where the US provided tsunami relief, support for the US went up. (One would almost suggest that interests matter, but that would be heresy in the public opinion world.) [More]

Of course we don't care what the rest of the world thinks, right?  Except China, of course (since they hold a bunch of our debt).  And maybe the UK, since they have supported our wars faithfully.  And Israel, since their lobbyists can beat up anybody else's.  And maybe Russia.  And Saudi Arabia....

Whatever.
Posted by John Phipps at 6:22 PM

Email ThisBlogThis!Share to TwitterShare to FacebookShare to Pinterest
Labels: international