Mike Wilson piles on uncharacteristically and belatedly with critics still howling about the EPA's Margo Oge's blithering ad lib answers before Congress on the indirect land use issue.

OK, I can understand tossing out some red meat for corn farmers anxious about prices, and blaming the EPA for our troubles is a sure winner.

But then he wanders clean off the Rational Reservation with this:


If passed, this new RFS could derail a growing bio- fuel industry, forcing the nation to become re-addicted to foreign oil — something President Barack Obama campaigned against before the election. [More]


As usual, ethanol cheerleaders omit any actual, you know...numbers or data to back up claims. So let me see if I can find out how they arrived at the belief ethanol was "replacing foreign oil".  Here is my annual review of Bad Guy Oil with domestic production added.

What am I missing? 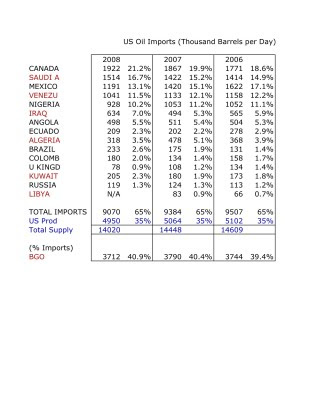 I will admit that the 2009 YTD figures show some minute changes, like domestic production rising to 36%, and all usage dropping sharply due to the recession, but the picture remains virtually static.

There is no evidence I can find:

Ethanol backers have some issues right now, I realize.  It's hard to claim its use helps reduce GHG emissions when virtually all your proponents reject anthropogenic climate change. No AGW = no ethanol GHG benefit, right?

And the GAO report on the blender credit didn't work out quite like they hoped.


The credit “may no longer be needed to stimulate conventional corn ethanol production because the domestic industry has matured, its processing is well understood, and its capacity is already near the effective RFS limit of15 billion gallons per year for conventional ethanol,” the GAO said. [More]


(Keep in mind too, that if the blender credit disappears, the ethanol tariff defense crumbles.)

But like critics who are outraged simultaneously at the cost of health care reform and efforts to cut the cost are proving, consistency in logic is no longer really necessary.  Anger is enough.

I will agree we have an addiction problem.  We corn growers are addicted to an ethanol industry that requires immense political effort to offset growing economic realities.

[Note:  I dunno - when I add some charts, etc. the HTML gets away from me.  Sorry about the screwy font stuff]

Email ThisBlogThis!Share to TwitterShare to FacebookShare to Pinterest
Labels: ethanol

John now you know you will be gettin speared for that one !! Thanks for the report though it does show some dramatically different results then the LObbiest for ethol would have us believe.
I have often wondered how increasing this mandate to 15% would actually help in this economy with driving down how does an increase make up for the huge loss in demand.
Well anyways just wanted to say I stand shoulder to shoulder with you on this one JR