Hey - maybe Big Oil is patriotically pulling us out of recession. 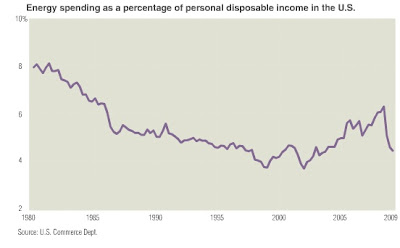 The CHART OF THE DAY tracks household expenditures on energy as a percentage of disposable income during the past three decades, according to data compiled by the Commerce Department. Paulsen had a similar chart in a report yesterday.
The ratio dropped to 4.4 percent in this year’s second quarter from a peak of 6.3 percent in the third quarter of 2008. The latter reading was the highest since 1985 and coincided with record prices for crude oil, which had reached $147.27 a barrel in New York trading. Crude settled yesterday at $74.15 a barrel, a drop of about 50 percent.


“Changes in the energy burden are at least as important” in determining what consumers spend as shifts in their financial obligations, such as mortgage and consumer debt, Paulsen wrote. [More]

Then too, maybe those hysterical optimists on Wall Street are on to something as well.

It's hard to balance these verdant seedlings easily against dismal unemployment picture.  The big question is the delay factor.  And whether we have fundamentally changed consumption patterns in the US.

I have to agree with the above comment..Lower oil and consequently fuel prices are better for the economy than any stimulus bill. Mayhaps the gubber-mint should have taken over oil companies, rather than banks, wall street, health care, etc., etc.,..

I had already done this analysis, just never thought to write an article about it.

I am employed with a decent enough income (which I am thankful for), but finances did get tight this past year when we had unexpected medical bills.

This caused a re-evaluation in our outgoing stream of dineros.

We found out that we had two costs that had increased more than 40%, and that was Automobile gasoline and winter heating oil. (yes, elecricity jumped too, but we do not use enough for it to be significant).

Everything else either stayed relatively level or we were able to compensate for the increase.

Yes we could drive less and turn the thermostat down in the winter. But I have to go to work, which is a major driving expense. Those miles do not change. And ask my wife, the thermostat was as low as it could go before all this started.