A competition where everyone wins...

China is embracing education with vigor. And as usual with China the numbers tend to overwhelm at first glance. 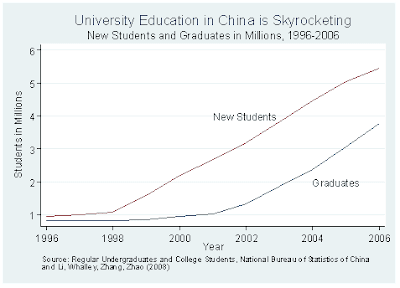 University education in China is skyrocketing. In 1996 China had less than 1 million freshmen, in 2006 there were over 5 million freshmen. The freshman class is continuing to grow and university graduates, of course, are just 4 years behind. About half of the entering students are in a hard science or engineering program. As a result, China today produces 3 times more engineers than the United States and will quickly overtake the U.S. in total graduates. [More]

I agree with Alex's optimism about seeing people as brains who lift us all rather than stomachs who burden us. The tendency to underestimate the importance of a growing population is essentially the mindset of a wealthy society, which views others as those who can only take what I have, rather than people who can help me have more or better things. So while China is struggling to find enough oars for all who want to row their economic ship, places like Iowa can't come up with job recruits.

Iowa’s surplus arises from colliding trends: the exodus of young college graduates, a state economy that adds 2,000 jobs a month, low immigration and birth rates, and an image problem that makes it difficult to recruit workers from out of state. Iowans’ median age is nearly two years above the national figure, and the state is near the top in the rates of women in the workforce and workers with multiple jobs — further shrinking the pool of people who might be drawn into the market.

“It’s really a perfect storm,” said Elisabeth Buck, director of Iowa Workforce Development. Over the next decade, more than 70,000 workers a year will become eligible for retirement, with school enrollment — potential replacement workers — dropping by 20,000 since 1998, while the nationwide housing crisis makes it harder for companies to recruit from out of state, because potential employees cannot sell their homes.

Last year, the state added nearly 13,000 nonfarm jobs, in part because of growth in ethanol and wind energy, and lost 3,300 people from the workforce. With statewide unemployment at 3.5 percent, compared to a national rate of 5 percent, nearly everyone who wants to work and can work has a job. “We’re looking for ways to grow our population,” Ms. Buck said. [More]

What does this do to the argument for ethanol plants which will bring "badly needed jobs" to places like Iowa? Looks to me what they badly need are "job-fillers".

[Blognote: I have discovered from conversations with "loyal" readers, that few of you bother to read the source material I link to. Bad readers, bad! No biscuit! If you read the above, you might come to the same "well, duh!" conclusion I did: raise wages.]

The other curious linkage is the way China is investing wealth and talent in Africa.

While rising demand for commodities is one way that Asia’s economic boom helps to raise African living standards, China’s economic involvement in Africa now goes far beyond arms-length imports and exports. Chinese firms have begun investing directly in African oil and mineral producers and in roads, dams, and telecommunications infrastructure. It is estimated that annual Chinese foreign direct investment in Africa surpassed the one billion dollar mark in 2005 and has continued to rise since. Shuttered factories and mines have been brought back to life and severed roads restored. The spread of cell phone technology has allowed rural African grain markets to function more efficiently, probably improving the lives of consumers, farmers, and traders alike.

No one knows the exact figures, but hundreds of thousands of Chinese workers and entrepreneurs have also migrated to Africa in search of their fortunes. This new Afro-Chinese community—from telecom engineers to owners of small Asian restaurants and medicine shops—has been a striking new presence in my own recent travels in both West and East Africa.

Why have Chinese individuals and firms dived in when European and U.S. investors have largely shied away? In discussions with Chinese investors, it seems the key motive is simple: profit. Africa provides bountiful profit opportunities across multiple economic sectors for Chinese firms flush with cash from their boundless growth at home. Chinese investors also have a major advantage over their Western counterparts in that they know how to make money in a developing–country business environment where the rule of law is optional, corruption and bribery are the norm, and infrastructure is patchy. Their experiences at home give them a big leg up on the competition. [More]

Much of China's educational effort is pointed at biotechnology. Like here in the US, the big payoffs appear to be in medical adaptations, but the immense educational and research effort should spill over into agricultural biotech as well. It could be the eventual Monsanto competitor will be Chinese.

China's biotechnology sector will continue to grow, driven by domestic demand and global investment. There is currently a less skilled and experienced workforce for applied sciences, but with a large student population intensely interested in learning about biotechnology, the requisite skills can be learned quickly. Collaborative efforts by Chinese universities and companies will ensure a steady supply of well-trained workers for more homegrown innovation for China to join the global biomedical sector. Great opportunities are present for both US and European-trained scientists who will be essential for accomplishing the task of training and developing a biotech workforce to meet the demand in China. [More]

Coupled with their growing influence in the second largest continent and people most Americans rarely think about, it is hard not to root for a people willing to sacrifice today for a better world they will probably not live to see.

To be sure, Chinese entrepreneurs are every bit as avaricious as Western counterparts, but the billions struggling up from day-to-day existence lends this emerging power with a vitality that will add to the world of the future just as the United States did for centuries.

I imagine there will be a great deal of verbiage spilling out from media about (but not naming) the new "Yellow Peril", but I for one think it is a positive development to see imperialism (if that is the supposed threat) based on economic rather than military power.

Feel free to compare to our strategy in Iraq with China in Africa.
Posted by John Phipps at 4:53 AM

Your blog is interesting but one reason why people who read it don't read the source material is probubly because your post is long and contain mostly quoted material.
Anyway though, the subject matter is what I am interested in. I live in California and we seem to lack college graduates too. In the U.S. college has become more of a qualification rather than teaching useful information.

Part of our problem is the lack of men seeking higher education.

When I graduated from Ag School with a major in Economics, only about 10% of the class were female. Now the ration is 60% female and 40% male. This ratio seems to be consistant across the entire undergraduate university scene.

Yes there should have been more females graduating 50 years ago but we are doing some thing terribly wrong with the way we treat males that discourages them from seeking a college education.