Try keeping them out...

To get some perspective on what a professional investor sees when she looks at agriculture consider these two items from today's Bloomberg.com 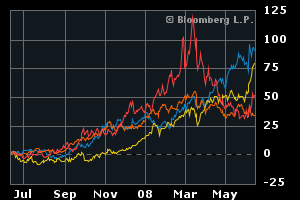 [Update: The vertical axis is percent change in price. (thanks, brian)]

What caught my eye (I visit here daily) was the possibility of corn (yellow) overtaking oil (blue). Other lines are gold (umm, gold-orange) and wheat (pinkish-red)

[Look, I'm an engineer, not an interior decorator.]

TIAA-CREF, the largest U.S. manager of retirement funds, bought $340 million of farmland in seven states in December. George Washington University plans to earmark $100 million for agricultural investments during the next year.

Farmland is having its biggest revival in almost 30 years as demand for corn and soybeans from Asia and the ethanol industry drive commodity prices to record highs. From Iowa to South Dakota to Wyoming, gains in rural land prices have ranged from 78 percent to more than 200 percent, according to farmers and data from Farm Credit Services of America in Omaha, Nebraska.

Farm values probably will rise at an annual rate of 6 percent to 10 percent in the next five years, said Murray Wise, the chief executive officer of Westchester Group Inc., a Champaign, Illinois-based manager of $550 million of global farm tracts. The median U.S. home is forecast to gain 1.2 percent through 2010 and stay below the 2006 peak of $221,900, the Mortgage Bankers Association in Washington said. [More]

New York knows where you live and how you're doing.
Posted by John Phipps at 2:10 PM

I went to the original graph and it did little to explain what the vertical axis represents- could you please enlighten.

I should have said - it's percent change since Jul 07.

Not surprising about NY knowing where I live...since I live in NY. lol Scary stuff though