We're running out of oil. 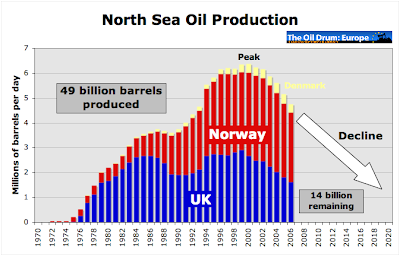 With production running at 86 million barrels per day, that means we are consuming 31 billion barrels of oil every year. It is a sobering thought that by the time the Sun sets upon the whole of the North Sea, it will have produced enough oil to fuel planet Earth for just 2 years. To keep the oil party going we need to discover a "new North Sea" every two years and the last time we managed that rate of discovery was in the late 1980s, 20 years ago. We have been living off savings since then, and the bank balance is running down. It is not possible to get an oil overdraft or to create an energy instrument to magic oil and energy out of nothing. There is no choice other than to reduce our oil consumption and it is much better that we do this in a controlled way than to let high energy prices and inflation rip through our economies - which is exactly what is happening now. [More] 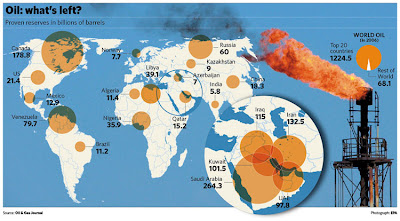 There is more than twice as much oil in the ground as major producers say, according to a former industry adviser who claims there is widespread misunderstanding of the way proven reserves are calculated. [More]

Well, my goodness, what's a farmer to think?

Pretty much anything you want. I have discovered in conversations and on this blog, people make up their minds first and justify it with cherry-picked facts later. Actually, we really do.

As a consequence, we rarely have conversations or public discourse that change minds. Instead, my guess is most of you responded positively to one example above and negatively to the other instantly.

Consider the great issues facing us today: climate change, income inequality, religious fanaticism, resource allocations, etc. Thanks to information technology, bozos like me can marshal facts and graphs to persuade and contradict. But I am not sure anyone is affected anymore.

My great worry about the future of this country - and even the world- is the decreasing number of people who can and will change their minds, and the unworkable society such reluctance creates.

So did anybody change their mind about the future of oil?
Posted by John Phipps at 12:55 PM

What concerns me most about this is how changing one's mind has been labeled as some sort of weakness. This leads to politicians who will stubbornly refuse to adjust their positions on issues even when presented with compelling new data - all because they don't want to be labeled a flip-flopper. I have some hope that either Obama or McCain might be a little better at incorporating new data than our current president, but it's pretty difficult when the 2012 campaign starts about 3 months after the 2009 inauguration.

I changed my mind 15 or 20 years ago when I realized that we never do run out of any of the things we're supposed to be about to run out of. I wonder if this qualifies me as a mind-changer, or whether I have to change it again to keep my credentials. I suppose I could change it, and then change it back. That might make me an advanced mind-changer.

I think single men are better equiped to change their mind/position far easier than married men, unless of course you have about 25 years of marriage experience then right there you are just a genius stateman.