To me, that is.  An ag media tempest accompanied the Federal Reserve announcement that [brace yourself] farmland prices had declined in the first quarter!!!


The value of good agricultural land in its district on April 1 was 6% lower than it was on Jan. 1, the Chicago Fed said Thursday. The quarterly decline is the sharpest since 1985, when the farm belt was mired in a wrenching debt crisis.
Any drop in land prices has a chilling effect on the agricultural sector because real estate is the largest source of collateral for farmers; their borrowing power is dropping along with the value of their land. The seventh district, which is at the center of America's most productive farmland, includes all or parts of Illinois, Indiana, Iowa, Michigan and Wisconsin.
The report didn't offer actual land prices, but percentage changes. Prices of farmland across the district began dropping late last year on a quarterly basis after climbing higher for a decade. On an annual basis, the price of farmland on April 1 was just 2% higher than the same 2008 date in the Chicago Fed survey. Farmland prices were climbing at double-digit rates across much of the Midwest on an annual basis until last fall, when the gathering recession took at lot of steam out of commodity prices. [More] 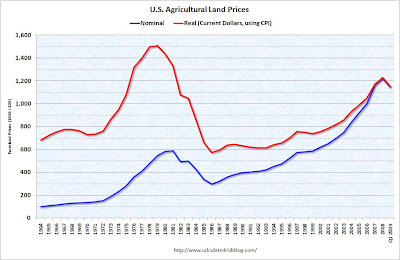 My beef is the first quarter of 2009 is graphed as the entire year.  It could be we will have a y-o-y (year-on-year) decline of 6%, but to display it as a done deal  - even though labeled - is duplicitous.
The correct depiction would be to have the decline only one-quarter the (x-axis) length as the other annual figures.  Moreover, what if prices bounce in Q2-4? That could make the 2009 figure flat or even up for the year.

The intense scrutiny on agriculture waiting for the first indication our "bubble" is bursting is understandable.  But my bet is any dip in land prices is primarily a result of ethanol uncertainty in Iowa.


Farmland values in Iowa doubled from 2001 through the first half of last year, mostly on strength of demand for corn from ethanol and for both corn and soybean exports. The market softened with a 50 percent drop in the prices of corn and soybeans since mid-2008.

"Most people think that we've lost the gains of the last 12 months, but overall the market is flat," Iowa State University economist Mike Duffy said. [More]

Meanwhile, IA has corn growing and prices rising thanks to ECB growers like me who can't get into the fields, as well as impressive export demand.  Regardless, I see this as a buying opportunity, and I'll bet I'm not alone.
Posted by John Phipps at 5:00 AM