Maybe if we didn't eat in our cars...

While correlation is not cause, it's hard not to draw some implications from this: 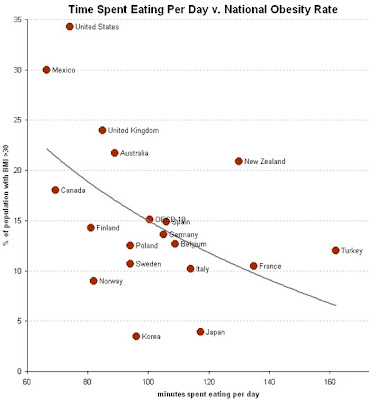 Yesterday, in posting some of the data from the Organization for Economic Cooperation and Development’s Society at a Glance report, I noted that the French spent the most time per day eating, but had one of the lowest obesity rates among developed nations.
Coincidence? Maybe, maybe not.
Here I’ve plotted out the relationship between time the average person in a given country spends eating and that country’s obesity rate (as measured by the percentage of the national population with a body mass index higher than 30). [More]

Chew your food.  Wait to be excused.
Posted by John Phipps at 10:02 AM

Maybe it also has to do with the fact that it takes 2 plus hours a day to choke down food in Turkey. Give me my HFCS and I'll stay happy.

I don't know if I draw the same conclusion, the data points are clustered too closely together to determine a trend line.